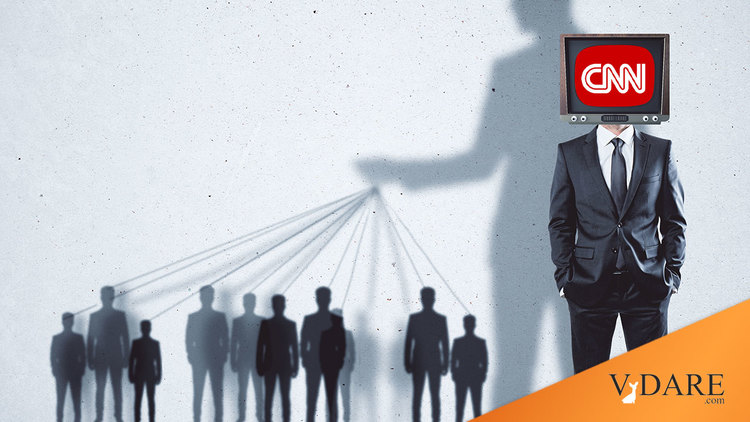 Silicon Valley Algorithms Are Keeping MSM Alive, YOU Are What's Keeping VDARE.com (And The Truth) Alive

Earlier, by James Kirkpatrick: Distrust And Verify When It Comes To "Mainstream" Media Reporting

1/3 Leftist source, but revealing because Silicon Valley is also suppressing immigration patriot (and race realist etc.) sites. FIGHT BACK BY SIGNING UP FOR VDARE's e-BULLETIN NOW!..https://t.co/CePJEE4DyE

The point made by "Humans Are Free" is that Silicon Valley deliberately promotes legacy media, ignoring the much more trenchant, truthful, and well-research coverage provided by, for example, us here at VDARE.com.

The emergence of the internet was met with hope and enthusiasm by people who understood that the plutocrat-controlled mainstream media were manipulating public opinion to manufacture consent for the status quo.

But it never happened. Internet use has become commonplace around the world and humanity is able to network and share information like never before, yet we remain firmly under the thumb of the same power structures we’ve been ruled by for generations, both politically and psychologically. Even the dominant media institutions are somehow still the same.

So what went wrong? Nobody’s buying newspapers anymore, and the audiences for television and radio are dwindling.

How is it possible that those same imperialist oligarchic institutions are still controlling the way most people think about their world?

The answer is algorithm manipulation.

It's the opposite of "Shadowbanning"—the deliberate suppression of search traffic going to wrongthinkers, again, that includes us at VDARE.com.

Someone at Google really believes the "Fit to Print" thing, and thinks people should be reading the NYT instead of us.

As Peter suggested, if you want to make sure you keep up with us, sign up for our email bulletin here, and

While you're at it, sign up for our quarterly treezine as well. These communists intend to drive patriots off the internet. Denying us U.S. Mail will take longer

As James Kirkpatrick said earlier today,  a lot of what's reported in the MSM is simply made up.

We've outlasted several MSM sources (I can't help gloating over the fact that one of them is the Weekly Standard) so we may outlast the New York Times yet. (If you think that's a good idea, you can also donate here.)