Earlier by Federale: Japan Fighting Back Against Attempts To Make It "Nation Of Immigrants"

The Abe Shogunate is all good news these days: a nation and leaders who care about their people and the national wellbeing, but most importantly love their Japaneseness. And it shows in the economy and society. That's not to say that Japan does not have problems (population decline is one) but these can be addressed with a Hungarian solution. But for today we will address two issues, closely related. The first is a massive decline in the Land of the Gods crime rate and the second is a politician who is not afraid to be Japanese. These two issues are intimately related, in fact, you cannot have one without the other.

First, the full analysis of the 2018 crime rate is in. Japan’s crime rate declined 11%. In Japan, diversity is not strength, homogeneity is strength and a safe society.

Crime is at a historic low in Japan. A 2019 white paper by the Japanese Ministry of Justice shows that Japanese reported a little over 817,000 crimes to police in 2018, an 11% decline from the previous year and the lowest amount in the postwar period. Theft accounted for the majority of cases at 582,000. Crime statistics have steadily dropped over the last 16 years from a peak of 2,854,000 cases in 2002.

While some may claim there has been a decline in crime in the United States, but much crime goes unreported these days, but more importantly, the declines here are from a much higher level. You still can’t leave your bicycle unlocked in the United States, unlike Japan where a locked bike is more unusual than an unlocked one.

This leads us to "Why is Japan so safe?" Because they are a people and society united by race, culture, and language, but more importantly the ruling class, Japan’s aristocracy, aristocracy in the Aristotelian sense, a ruling class that is good and loves their nation and people.

One of those in the ruling class is the Finance Minister and Deputy Prime Minister, after the Prime Minister, really the new Shogun, the second most powerful member of the bakufu. Taro Aso, Japan’s Steve King, recently stated the obvious, Japan’s strength is a unity of people, rulers, and culture. Of course, Globohomo had a conniption fit. 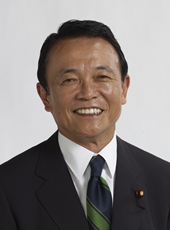 Japan’s deputy prime minister described the country as the only one in the world with a single race, language and 2,000-year-old monarchy, sparking criticism that he was ignoring an indigenous ethnic group and Japanese racial diversity.

Taro Aso, who is also finance minister and one of most influential lawmakers in Prime Minister Shinzo Abe’s government, has made a series of remarks in the past deemed insensitive and discriminatory.

“No other country but this one has lasted for as long as 2,000 years with one language, one ethnic group and one dynasty,” Aso said in a speech Monday.

Imagine this: Steve King as Vice-President, not a back bencher among 435 members, telling the truth about race, immigration, crime, and society. That is what we have in the second most powerful Japanese politician.

Sadly though, he was forced to give a less than sincere apology for telling the truth.

Aso, 79, apologized on Tuesday, saying he meant to say Japan has survived a long time without experiencing any major migrations or occupation by other ethnic groups.

The main claim by globalists that Japan is not a unified nation based on race is the Ainu, one group of people who lived in the main islands of Japan, northeastern Honshu and Hokkaido, before the major migration of the predecessors of the modern Japanese population, who migrated mostly from through the Korean peninsula long before the development of the Korean language and culture. The Ainu are officially at a population of 25,000 (with  liberal estimates go up to 200,000)  but even that is suspect, as the estimate is for those who do not know they are Ainu, i.e., people who are fully acculturated into Japanese society, who see themselves as Japanese.

Indigenous Ainu people have lived in what is now northern Japan for thousands of years and were officially recognized by a law enacted last year to protect and promote their culture.

The Ainu did have an important part in Japanese history though, as the title Shogun means Barbarian Subduing Generalissimo, a sort of Falangist strongman similar to Francisco Franco or any number of caudillos from South America. The Shogun was originally appointed to conquer the northern parts of Honshu and later all of Hokkaido in the name of the Imperial House.

The Ainu were the chief victims of this manifest destiny. On a side note, the Ainu are distinguished mainly from the Japanese by their long hair and beards, more hirsute than most Japanese, but one can see the admixture in the Japanese who cultivated beards and mustaches during the Meiji Period.

Other than the Ainu, there is no indigenous population of non-Japanese. The rest are immigrants, or descendants of immigrants and their anchor babies, though legally many are descendants of foreign subjects of the Japanese Imperium, but those, mostly Koreans, Zainichi, consider themselves Korean, and act that way, most maintaining passports from one of the two Koreas. However, globalists are making much of the minuscule number of foreigners.

Japan also has 2.7 million foreign residents, more than 2% of its total population of 126 million, according to government statistics. That includes more than 400,000 ethnic Koreans, many of whom came voluntarily or forcibly to Japan during its 1910-1945 colonial rule of the Korean Peninsula, and about 360,000 Koreans who have been naturalized.

It is sad to see Deputy Prime Minister Aso apologize, but this was one of the apologies merely for consumption of foreigners outside of Japan. The apology was insincere and most of those with knowledge of Japanese culture see this. A sincere apology would have been accompanied by resignation. But Aso did not resign, nor did he grovel. In fact, the wording of his apology and accompanying statement were not really much of an apology and was also noted by the MSM that this is the latest in a long line of ethno-nationalist statements, called gaffes by the press.

Asked about the contradiction between the legislation and his remarks, Aso replied, “I have no intention of denying the government’s position.”

On Monday, the former prime minister hailed Japan’s success in the Rugby World Cup last fall with a team featuring players from diverse backgrounds, before going on to make the remarks about Japan as a linguistically and ethnically homogenous [sic] nation.

An ally of Abe, the outspoken Aso has repeatedly come under fire for gaffes and controversial statements.

Instead of getting the Steve King treatment, Aso remains in power. Just think if the cucks in the Republican Party could achieve if they just ignored the globalist press. Low crime is a consequence of racial and cultural unity. Without one, you cannot have the other.

Sonno jo I! Revere the Emperor, Expel The Barbarian!