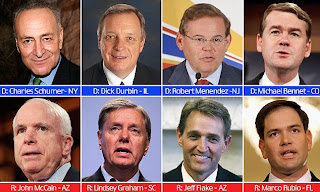 The past two months have seen a series of push polls commissioned by the front groups employed by those who are paying off the Gang of Eight Republicans (Marco Rubio, Lindsey Graham, John McCain and Jeff Flake). In each case, the purpose was to lie to respondents, in order to delude them into supporting the illegal alien amnesty/immigration surge bill, and leverage the phony “results,” in order to delude opponents into thinking that resistance is futile, thereby crippling the opposition. The contemporary term used in communications studies (formerly known as rhetoric) is “bandwagoning.”

I plan on writing on other amnesty push polls; I would appreciate it, if anyone reading this would send me links to other such fake polls.[VDARE.com note: Peter Brimelow's recently posted WND column says "S.744?s backers are actually presenting the measure as an enforcement and anti-amnesty bill (they redefine amnesty) in what appears to be a lavishly funded election-campaign-style phone bank offensive, which I’ve heard about from states as far flung as Montana and Alaska," the Montana and Alaska links being to Paul Nachman and Ryan Kennedy's personal reports of receiving calls.]

A new national survey conducted by the Winston Group shows a majority of Republicans support the immigration reform bill.

The survey was commissioned by Americans for Tax Reform (ATR), the National Immigration Forum Action Fund and the Partnership for a New American Economy.

Worth noting is that, “even after hearing opposition arguments, support for reform remains,” said pollster Kirsten Soltis Anderson on a conference call this morning.

Following are some findings highlighted by the press release:

- 85 percent of Republicans either “strongly support” or “somewhat support” the requirement that “illegal immigrants in the U.S. register for legal status, pay fines, learn English, pay taxes, and wait in the back of the line to apply for citizenship, until everyone who is currently in line to legally enter the U.S. gets in.”

The Wall Street Journal has more.