Millions Of Californians Are De-Powered As Utility Safeguards Bottom Line

California’s mass electricity shut-down has not gone well. Millions of state residents got little warning that their power would be switched off for up to a week while Pacific Gas & Electric checked its lines for any technical problems.

But as I wrote a couple days ago, it’s likely PG&E’s biggest concern was losing another pile of money if it was seen to be irresponsible: California Power Company Unplugs Customers to Protect Its Profits. The utility recently paid out $11 billion to resolve most of the insurance claims from two major wildfires in the state.

Naturally there was a great deal of anger about the shutdown, as Thursday’s Los Angeles Times described: 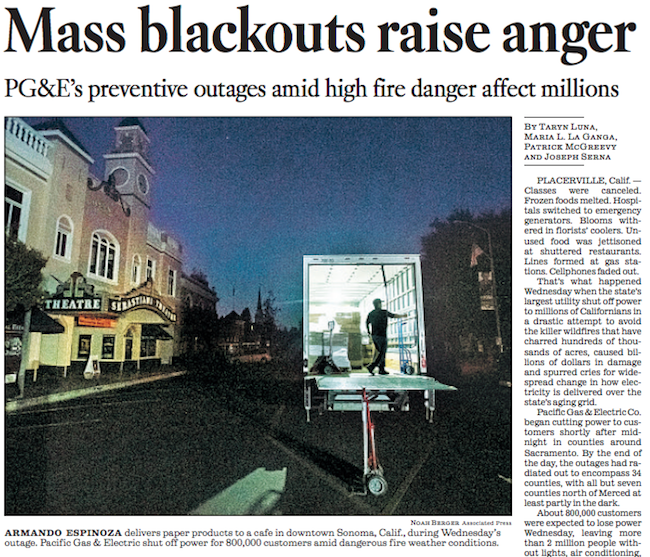 And there were millions of persons affected. Some of the reports use the term “customers” which means households, not individuals.

For some people, the outage was more than a huge inconvenience: A front page article in Friday’s New York Times titled “Frailest in Peril As Power Cuts Dim California” pointed out that many medical devices require electricity to run. (Reprinted in MSN.) So wildfires are not the only danger to public safety — PG&E endangered some Californians by its power shutoff.

I was lucky that the unplugged zone in my town was a few blocks away, but I still carried a flashlight around the house after dark just in case. It was unsettling that PG&E has sounded unmotivated to get the lights back on ASAP.

That’s what happened Wednesday when the state’s largest utility shut off power to millions of Californians in a drastic attempt to avoid the killer wildfires that have charred hundreds of thousands of acres, caused billions of dollars in damage and spurred cries for widespread change in how electricity is delivered over the state’s aging grid.

Pacific Gas & Electric Co. began cutting power to customers shortly after midnight in counties around Sacramento. By the end of the day, the outages had radiated out to encompass 34 counties, with all but seven counties north of Merced at least partly in the dark.

The move by PG&E marks the largest power shut-off to date as California utilities attempt to reduce wildfire risks. Equipment malfunctions have been tied to some of the state’s most destructive and deadliest fires, including the 2017 wine country blazes and last year’s Camp fire, which devastated the town of Paradise and killed 85 people.

“The safety of our customers and the communities we serve is our most important responsibility, which is why PG&E has decided to turn power off to customers during this widespread, severe wind event, ” Michael Lewis, PG&E’s senior vice president of electric operations, said Wednesday. “We understand the effects this event will have on our customers and appreciate the public’s patience as we do what is necessary to keep our communities safe and reduce the risk of wildfire.”

But tempers flared against the utility everyone loves to hate—enough so that a cautious PG&E erected barriers around its San Francisco headquarters Wednesday. At the same time, the California Highway Patrol was investigating whether someone shot at a PG&E truck Tuesday night.

In the Sierra foothills town of Placerville, the power went out about 3 a.m., leaving many residents angry and scrambling for supplies. Customers roamed the aisles of Placerville Hardware in darkness at midmorning, loading up on flashlights, oil lamps and batteries. Cash registers ran on a generator.

“There isn’t a tree moving right now because of the wind, ” said Tod Pickett, who was buying battery-powered lamps. “And they are telling us there’s a hurricane. There are 12 billion reasons why PG&E is sticking it to us, ” he continued, referring to the monetary settlements paid after past fires. (Continues)