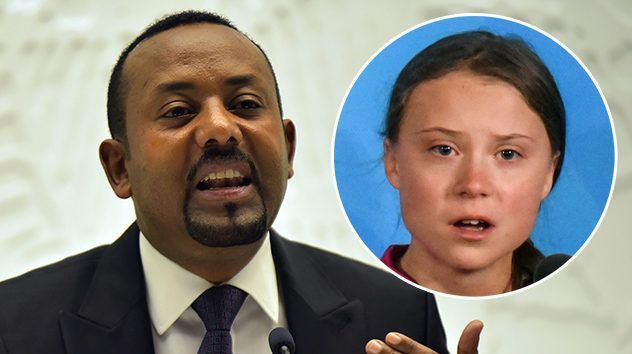 NEWSWEEK: White Child's Rightful Nobel Peace Prize Was Corruptly Given Instead To An African Leader Who Merely, You Know, Made Peace

GRETA THUNBERG SNUBBED FOR NOBEL PEACE PRIZE BY COMMITTEE RUN BY NORWAY, ONE OF THE WORLD’S BIGGEST OIL AND NATURAL GAS EXPORTERS

The Nobel Committee has surprised oddsmakers by not picking 16-year-old Greta Thunberg to win the 2019 Nobel Peace Prize.

The five-member Norwegian panel instead announced on Friday that Ethiopian Prime Minister Abiy Ahmed had won the award, “for his efforts to achieve peace and international cooperation, and for in particular his decisive initiative to resolve the border conflict with neighboring Eritrea,” a statement said.

The Nobel Peace Prize is not necessarily an accurate prognosticator of who will turn out to be a Good Guy in the fullness of time. But there has been some good news coming out of Ethiopia since this guy, Abiy Ahmed, came to power, such as making peace with Eritrea and letting a bunch of political prisoners out of jail. He had to survive a coup attempt a few months ago. It’s not unreasonable for the Nordics to give this guy a boost.

Ethiopia and Eritrea are hybrids of sub-Saharan Africa and the Middle East. They have more capability for inter-state war than most sub-Saharan countries. The War Nerd was impressed by the scale and mechanization of Ethiopian-Eritrean desert battles. In 2002 he wrote:

In the Horn [of Africa], war is normal and comes all sizes from family stabbings, to clan vs. clan war like Somalia, to total war between nation-states.

Which is what the Eritrea-Ethiopia war is. This is definitely not your typical African bush war — the kind you see in Sierra Leone or Liberia, with gangs sneaking around attacking villages, avoiding combat, carrying nothing bigger than your basic irregular-warfare kit of AK’s and RPG’s, specializing in rape and mutilation.

The Ethiopian-Eritrean war is more like the Franco-Prussian War, or even the Western Front in 1914. These are two countries fully supplied with the best of mid-20th-c. Soviet weaponry, and smart enough to keep it running. And use it. And boy, have they used it! They’ve had Verduns, Stalingrads, Marnes down there — and nobody even notices!

But a little World War I goes a long way, in my view, so it’s time for peace.

From the Wikipedia article on the Ethiopian prime minister:

His deceased father, Ahmed Ali, was a Muslim Oromo (and had four wives, while his deceased mother, Tezeta Wolde, was an Orthodox Christian Amhara.

If I have this straight, the Oromo are a black group and the Amhara are a brown group with links to Yemen in Asia. The Amhara see themselves as descended from the son of the Queen of Sheba in the OT.

Abiy is the 13th child of his polygamous father and the sixth and youngest child of his mother. His childhood name was Abiyot (English: “Revolution”). The name was sometimes given to children in the aftermath of the Derg revolution of 1974.

He met and married his wife, Zinash Tayachew, an Amhara woman from Gondar, while both were serving in the Ethiopian Defense Forces. They are the parents of three daughters and one recently adopted son. Abiy is multilingual and speaks Afaan Oromo, Amharic, Tigrinya, and English…. Abiy is a devout Evangelical Pentecostal Christian of the Full Gospel Believers’ Church.

So he speaks the three main ethnic groups’ languages, and is a Christian but his dad was a Muslim.