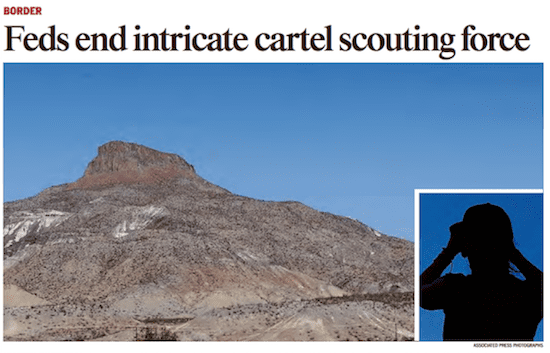 Monday’s Washington Times highlighted a border enforcement success in taking out the cartel spotters who hang out in the hills and keep an eye on where the Border Patrol is active so smugglers can bring in their loads more successfully. 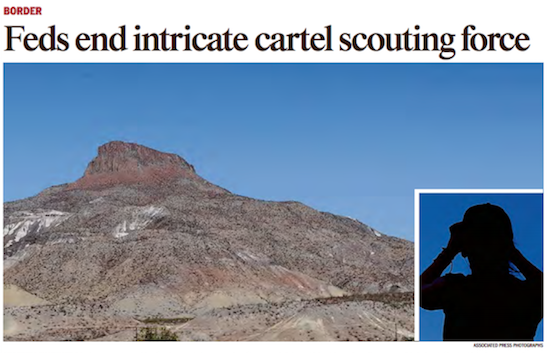 It would be wrong to think that valuable illegal drugs are sent randomly into the lucrative United States market. The spotters provide an important link in running the big business of the Mexican cartels.

In fact, the cartels’ spotting strategy has been around for years. I wrote about the subject in 2010: BLM: Southern Arizona Is Dangerous Because Mexican Cartels Control It: 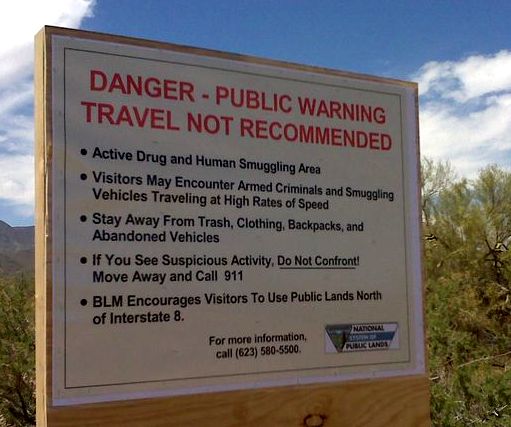 As the current article notes, the spotters are located as far as 60 miles within the United States, which indicates the power and determination of the cartels. Hopefully the lessons learned from years of dealing with this crime can help prevent further incursions of hostile foreign criminals.

Federal prosecutors have wrapped up what appears to be the largest takedown in history of smuggling cartel scouts, winning prison sentences for 18 people who were involved in an intricate scheme to spy on Border Patrol movements and help the Sinaloa Cartel sneak drugs into the U.S. without being detected.

The Mexican scouts camped on five mountaintops along a line that ran more than 60 miles into U.S. soil, marking a stunning level of penetration by the cartels, who were able to track Border Patrol movements all the way from the border to the interstate just south of Phoenix.

Scouts would stay in situ for months at a time, armed with binoculars and solar charging equipment to replenish batteries for the encrypted radios and cellphones they used to alert their masters back in Mexico — and sometimes directly to the drug backpackers themselves — giving the all-clear or warning to lie low if Border Patrol agents were nearby.

They were assisted by a thorough resupply network that would hike water, food and other necessities into the remote mountain locations.

It took a monthslong investigation, including a sting operation in which undercover agents posed as resuppliers for the scouts, and the legal case dragged on for two years after the December 2017 arrests.

The final defendant was sentenced last week for his role in the operation, which, according to a ledger kept by one of the scouts and recovered by agents, accounted for as much as 1,800 kilograms of marijuana, or almost 4,000 pounds. That works out to a street value of more than $650,000.

Agents believe they managed to nab another 1,967 kilograms (more than 4,300 pounds) carried by the same operation, which the government in one court filing labeled a “staggering amount” to be tied to one single scouting operation.

Michael Bailey, U.S. attorney for the District of Arizona, called the case “a significant blow to the cartel.” Scott Brown, special agent in charge of the Homeland Security Department’s investigations office in Phoenix, said the prosecution showed that the federal government can take out a complex hilltop-spotter operation.

“The west desert portion of the border poses various environmental challenges,” he said. “However, when federal, state, local and tribal law enforcement bands together, we send a clear message to the cartel: You will not operate on the border with impunity.”

The existence of cartel scouts deployed to U.S. locations is deeply controversial. During the administration of George W. Bush, a congressman raised the issue with the White House. Chief of staff Karl Rove ridiculed the idea that Mexican drug cartels had armed agents on U.S. soil.

Making criminal cases has also been tricky. Prosecutors often have to settle for illegal immigration charges and light penalties instead of drug smuggling convictions.

But a series of successful prosecutions over the past couple of years has exposed the breadth and sophistication of the cartel operations — and has shown that the Justice Department has figured out how to make cases stick. (Continues)