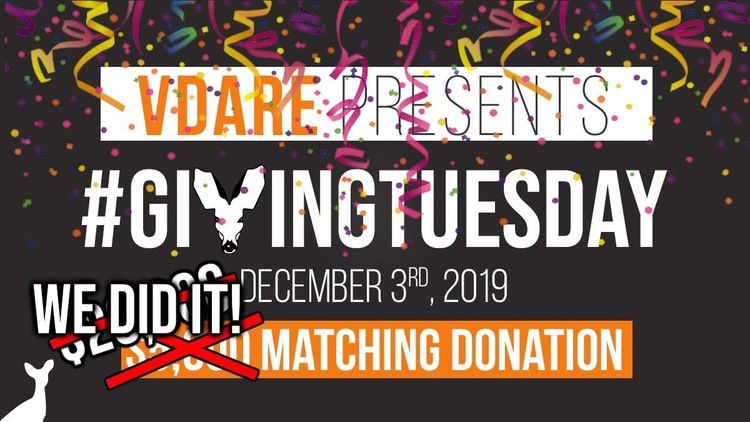 Help us reach our final goal–keep up this incredible momentum. Please give your most generous donation  now!

Tuesday’s kickoff of VDARE.com’s year end fundraiser started with what I thought was a challenging goal: to bring in $5,000 in one day to meet a matching donation pledged by one of our standout donors. Little did I know what an enormous groundswell of support we would receive, ultimately breaking VDARE.com’s 20 year record for donations in 24 hours.

We promoted the initial challenge in the usual ways across all social media platforms and via email. But I’m always on pins and needles in anticipation of fundraiser. On Tuesday morning the donations started coming in early and generous—what was encouraging quickly became astonishing, and by noon eastern time we were mere dollars from meeting our $5,000 goal. It was still mid-morning on the West Coast!So I started calling around to some of our most generous friends.

My first call was to South Carolina, to the donor who gave us the initial $5k, to see if he, like me, was high on the turnout and inspired to increase his gift. He was, indeed, delighted by the money coming in but was tapped out. Too many obligations to the tax man and a nagging lawsuit.

Next call was to Washington state, to a donor who first donated last December after finding us on Twitter. He’s frequently in the wilderness, so I wasn’t surprised to have to leave a voicemail.

Then I rang Oklahoma, to one of our most engaged donors, a man who has been funding VDARE.com—and other Dissident Right organizations — for more than twelve years. But he’s already doubled his giving to VDARE.com this year and cheered me on to call upon someone else.

Finally, I called another Washington State donor (we have a very generous pocket of readers in the Pacific Northwest) who has been generously supporting VDARE.com for close to fifteen years. I hit voicemail with him, too.

Meanwhile the tally kept rising. As did the mood in the office, I can assure you! Noah began putting together the intro and graphics for our livestream while my assistant and I called out each time a new donation came in. It was wild, and at times whacky.

Suddenly the phone rang. Our friend had emerged from the wilderness. “This matching grant has really inspired people today, and I think a stretch goal would keep the momentum up,” I told him, “we might even set a record for giving. What do you think about pledging $2,000?”

And just like that, we had a stretch goal twice the size of our original. Even more amazing: it was met by individual small donation within two hours.

I ordered Chinese takeout for the team—John Derbyshire, Noah on video support, my assistant, Peter and myself—as we switched gears headed into the livestream slated for my living room. My kids were all excited to have so many guests for dinner, and it turns out that John never has Chinese takeout, presumably because he has a Chinese wife, so I like to think it was exciting for him too! As we negotiated with the children about their appearance on camera to say “Merry Christmas,” the phone rang again.

As soon as I picked up the phone, almost without saying hello, my fifteen-year donor said “I’m pledging $5,000, how much do you have in so far?”

At this point, we had only barely met the first stretch goal and the night was closing in on the east coast. Sure, we had the livestream coming up, but I worried that maybe we had captured everything there was to capture. But why not give it a try? We’d already broken the record for one day of mass giving—but we may as well SHATTER IT! As Buzz Lightyear said, to infinity  and beyond!

I shouldn’t have doubted. This community always comes through when we need you.

Two hours later, as we closed out the livestream, we were only $387 short of the super stretch. That amount—and more—came in within minutes of turning off the mics. By midnight we surpassed the super stretch matching by over $1,000, bringing our 24 hour total, including the fully matched pledges, to $42, 574!

We have a lot more in store for you during this Year End Appeal, and I’m so looking forward to amplifying different voices from our staff and supporters as they ruminate onVDARE.com’s 20 years of patriotic immigration reform. But ultimately, this is about you, our readers, America’s patriots. VDARE.com may be the voice of the historic American nation, but we are only the voice. The community is the body. And we’re getting stronger every day.

Help us reach our final goal—let’s keep up this incredible momentum. Please give your most generous donation now!