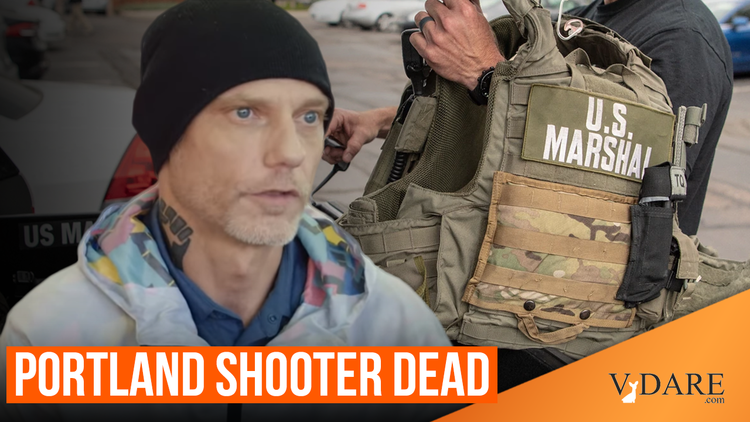 The Antifa guy who shot the pro-Trump guy in Portland is dead.

Judging from what little I’ve read about the shooter, mostly from his sister, he was your basic Trouble-With-A-Capital-T type: e.g., he’d steal his mom’s seizure medicine. I doubt if he was exceptionally ideological, but in Portland being on the left gives you an excuse to act out your various anti-social urges.

He was arrested once or twice over the summer for carrying a gun before he shot the guy who was spraying him with something defensive like mace, but the Portland criminal justice system doesn’t seem to be enforcing gun control laws against Antifa. From Oregon Live:

Reinoehl’s posts indicate he attended many protests in Portland that began three months ago after the death of George Floyd in Minneapolis under the knee of a police officer.

On July 5 at one of the demonstrations, Reinoehl was cited at 2:10 a.m. in the 700 block of Southwest Main Street on allegations of possessing a loaded gun in a public place, resisting arrest and interfering with police

He was given a date to appear in court later that month, but the allegations were dropped on July 30 with a “no complaint,” according to court records. The documents don’t indicate why prosecutors decided not to pursue the accusations. Reinoehl spent no time behind bars.

Schmidt earlier Sunday decried the deadly violence. He took office on Aug. 1 and quickly announced that he wouldn’t pursue low-level charges against demonstrators, such as interfering with police or resisting arrest. He wasn’t district attorney when the office handled Reinoehl’s gun case.

It wasn’t an evil rifle, it was a mere handgun. What’s the worst that could happen with an unstable jerk with a loaded gun who thinks he’s Antifa Security?

Will Antifa make him their designated martyr and sing “The Horst Reinoehl Song” about him?