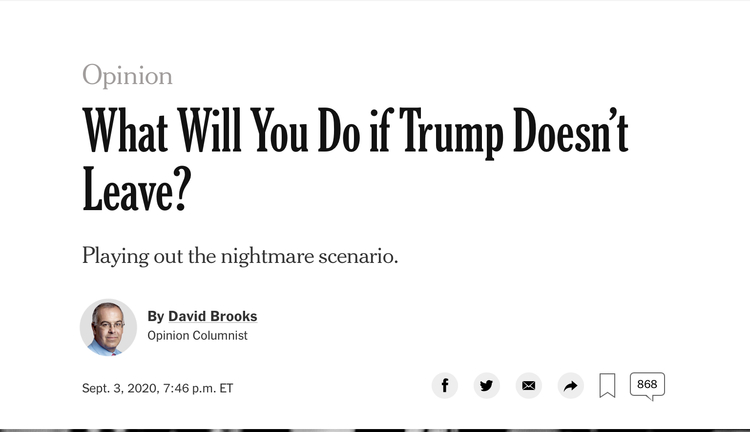 What Will You Do if Trump Doesn’t Leave?
Playing out the nightmare scenario.

… But a new force looms into view. For the whole Trump era a certain sort of conservative has been cowering from the Trump onslaught. Certain sorts of moderates and liberals have also been keeping their heads down, so they won’t get bitten off by the woke mobs. But now the very existence of the Republic is at stake.

It turns out, amid the existential crisis, there really is a group of sober people who are militant about America, who can see reality unblinkered by the lens of partisanship, and who are finally compelled to organize.

Who are the “sober people who are militant about America” that David is dog-whistling to? Could he the militant patriots he be referring to be … the military?

They understand that, like so many American tragedies, this is largely about race. It’s about the transition from a certain kind of white-dominated America to a diverse America — and the people who will do anything to stop it. …

If Trump claims a victory that is not rightly his, a few marches in the streets will not be an adequate response. There may have to be a sustained campaign of civic action, as in Hong Kong and Belarus, to rally the majority that wants to preserve democracy, that isolates those who would undo it.

Two themes would have to feature in such civic action. The first is ardent patriotism. The country survives such a crisis only if most people’s love of nation overwhelms the partisan fury that will threaten to envelop us.

The second is the preservation of constitutional order. Through epic acts of self-discipline, the nonviolent civil rights marchers in the 1960s forced their foes to reveal that if there were to be any violence and anarchy, it would come from the foes. …

Yeah, sure, Dave, lotsa luck with that as we’ve seen since Memorial Day with all your Peaceful Protests.

The process of mobilizing for an accurate election outcome, before it is too late, would be a struggle to preserve the order of our civic structure against the myriad foes who talk blithely about tearing down systems, disorder and disruption. It may be how we rediscover our nation again.

It’s time to start thinking about what you would do.

Similarly, the press has been making a huge hoopla today about Trump once implying that World War One (not Two, One) was pointless:

The AP has confirmed the accuracy of this extraordinary article. The White House has denied it. It could shatter perceptions of the President among the military. A recent Army Times poll showed declining support for him. https://t.co/4Qs6B91T8a

Is the point of this giant whoop-tee-doo in the media today over Trump disrespecting WWI dough-boys is to lay the groundwork for a military coup in case that proves needful?

People, can we calm down and back off?