Land Of The Free: REDSTATE Represses Comment Linking To VDARE.com, Congratulates Self 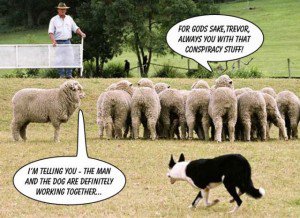 RedState's  problem: Some of their sheep can think.

Yesterday, further documenting the ongoing putrefaction of the once-valuable RedState I noted in REDSTATE Commissar Leon Wolf Orders GOP: Downplay Immigration In 2014, Pass Amnesty ASAP that amongst the torrent of highly articulate dissent on the comment thread one was

vdare.com (Derbyshire is exiled there) has a take on Leon H. Wolfe and the wussification of RedState on the immigration issue here: /posts/complain-to-erick-erickson-on-limbaugh-show-about-gelding-of-redstate

@vdare @heartiste @LeonHWolf @RedState Note,pro-vdare comment on RedState dltd by moderator. "No, sorry, we don't send people to that site."

Commissar Wolf has followed up with

And we are proud of that https://t.co/rlVdy4gdy7

Possibly the single most valuable asset America drew from its British roots was the tradition of working out political disagreements by debate, rather than by force. This was why Virginia’s House of Burgesses was founded in 1619, only 12 years after the first settlers arrived. In all other cultures, the practice never arose or had been long extinct. Free speech is essential to the process and it is incompatible with repression (which after all is just violence).

Evidently the Management of RedState does not share this heritage.

Consequently, as their readership (which largely does) realizes this, RedState will become another stagnant backwater like Free Republic.