Pamela Geller appeared on Sun TV’s Source program with Ezra Levant to discuss the appalling sights and behavior. The theme of the parade was supposed to celebrate the shared values of Islam and America (heh), but the event exuded threats and Islamic supremacy.

Exhibited parade items included a lynched female mannequin in the back of a pickup, Muslim men in black brandishing weapons (fake?), and real girls being held in a cage. Levant asked about the caged girls, “Is that the Boko Haram float?”

The four-finger salute, expressing solidarity with Egypt’s jihadist Muslim Brotherhood, appeared to be widely present in clothing and hand signs.

In other words, just another display of diverse Muslim values of barbaric terrorism, violence and misogyny.

You would think a pro-jihad display would get some attention in the media-thick city, but the press was largely absent except for sites like Breitbart and TheBlaze which reported it, plus SunTV.

Below, a female mannequin in a noose being hanged. Maybe next year they will act out pretend beheadings. 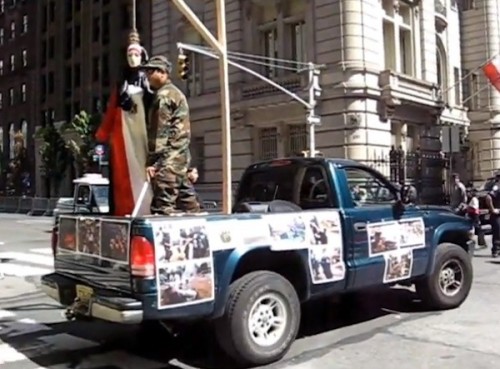 Below, Muslim men dressed in black pretended to shoot bystanders with apparently fake guns. Note the yellow T-shirt on the left with the four-finger Muslim Brotherhood sign. 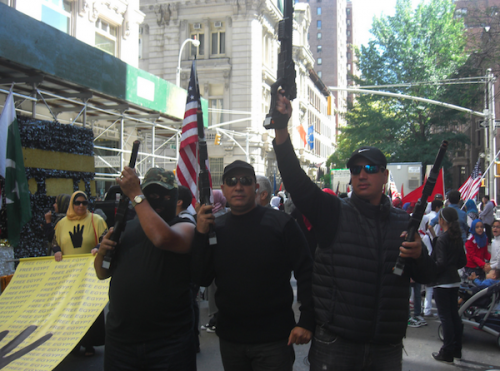 For more photos and videos, see the websites of Urban Infidel and Pamela Geller.