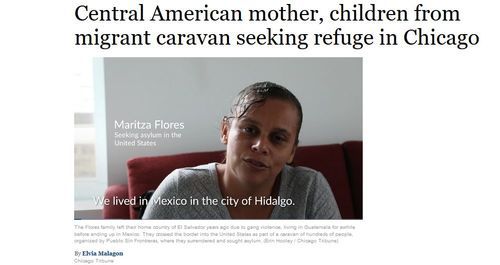 Kirstjen Nielsen, in her continuing sabotage of the Trump immigration policy, is now releasing most illegal aliens from the Caravan Of Death To America By Demographic Displacement.  Previously release of these caravaners was limited and sporadic.  Releases continue despite Attorney General Jefferson Beauregard Sessions III’s decision to eliminate those caravaners sole path to asylum.  Nielsen is at odds not only with enforcement priorities and now the law; her actions can only be viewed as deliberate sabotage.

Maritza Flores and her three daughters traveled thousands of miles to get here, part of a Central American caravan of migrants whose push northward to seek asylum drew harsh criticism from President Donald Trump. It also prompted Chicagoans Liz Gres and Pete DeMay, along with their two young children, to invite a refugee family to live with them at their McKinley Park home.

Their worlds collided in late May, when the Flores family got the green light to move from an immigration detention center in Texas to Chicago, where their asylum case will snake its way through the courts; one university study showed it can take four-plus years for immigration cases to be decided.

So Maritza Flores and her children will remain for years in the United States, and that is assuming she appears for her hearings, which is unlikely.  And four years is optimistic, the backlog in the immigration courts are increasing, in part because Nielsen refuses to take aggressive action against the caravaners and has yet to fully implement Expedited Removal.  And just how did Flores pass her credible fear interview?  She has no claim to fear of persecution by the Honduran government.  This is failure at every level by Nielsen.

The number of cases before federal immigration courts continues to rise, a new report shows, despite efforts by the Trump administration to reduce the backlog.

There were 714,067 cases awaiting judgement as of May 2018, the Transactional Records Access Clearinghouse (TRAC) reported, the highest level since at least 1998. The backlog has risen by 32 percent since President Donald Trump took office in January of 2017.

There should be no expansion of cases before the Executive Office For Immigration Review (EOIR), especially not from recent entrants, the caravaners included.  Expedited Removal should be used for all cases involving aliens attempting to enter the United States.  Instead Nielsen is sabotaging the system by allowing non-credible claims to asylum to be processed at the border, refuses to implement Expedited Removal, and allows illegal aliens with outstanding deportation orders to return for a second try in the immigration courts, or even be released with an amnesty.

A woman who took sanctuary in a Massachusetts church to avoid deportation to her native Peru has been granted a one-year stay of removal by federal immigration officials.

The Pioneer Valley Project and members of the South Congregational Church in Springfield have announced Monday that Gisella Collazo will be allowed to return to her Springfield home while she pursues lawful residency.

Collazo, who is married to an American citizen and has two U.S.-born children, took sanctuary in the church in March after being ordered by Immigration and Customs Enforcement to leave the country immediately.

She has said her efforts to remain in the U.S. have been stymied by “attorney errors.”

ICE says she entered the U.S. illegally in 2001 with a fraudulent passport

Nielsen is more interested in rewarding illegal aliens than enforcing the law.  No wonder immigration courts are backlogged and illegals are flooding the border.  They know that enforcement under Nielsen is a joke.  Time for Trump to fire Nielsen.  She is now even ordering the release of illegal aliens so they can care for their children.  You know these illegals will not appear for their immigration hearings.

After a raid on Tuesday that led to the arrest of 114 undocumented employees — rounded up by more than 100 immigration agents, using dogs and helicopters — at an Ohio landscaping company, Immigration and Customs Enforcement officials reported some workers have been released for “humanitarian reasons…”

On Wednesday ICE spokesman Khaalid Walls told NPR, some of those who were picked up had been released for a variety of humanitarian reasons, “including health, or primary care for a minor child.”

Why is Nielsen releasing some illegals who have children, but not releasing others?  Is she deliberately sabotaging immigration enforcement and encouraging the flood of illegals.  Her policies make no sense.  Time for President Trump to impose his policies on Nielsen; she isn’t President.