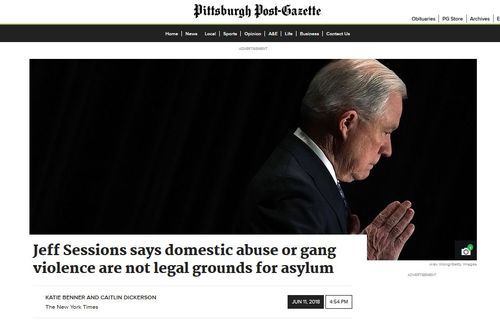 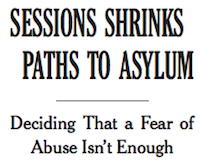 For those who think the United States should be the welfare office for the world, Attorney General Jeff Sessions’ recent asylum restrictions are seen with horror. His decision is to end the gravy train of admitting women who claim abuse by the husband or BF got a front-page headline on Tuesday’s New York Times right under the historic handshake photo of President Trump and Kim Jong-un.

In 2007, I wrote a VDARE.com article Victim Visas — How America Stupidly Rewards Misfortune and Fraud, a shocker then and now. Washington is seriously misguided when it enacts visa programs that value a black eye more than a college education.

But in the decade since, immigration lawyers and anti-sovereignty activists have pushed the criteria ever further into the liberal crazy zone, where a foreign woman can claim abuse and get asylum to the US with little oversight of the truth.

Wait, why is a case of domestic abuse in El Salvador America’s problem? Why can’t they relocate to somewhere in their own homeland?

Lawyer at the Immigration Reform Law Institute Michael Hethmon observed, “Asylum was never designed to deal with those problems. Asylum is not some sort of global make-a-wish foundation.”

Assuming claims are true, there are many millions of potential cases from the piggyman Third World of Muslims and Hispanics. One study said the majority of Mexican women experience gender violence. 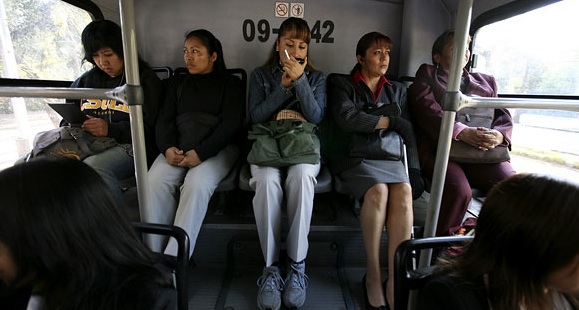 America has a duty to the well-being its own citizens which is diluted by the irrelevant claims of foreigners. On a planet with a growing population, currently 7.6 billion persons, the do-gooder rescue project is becoming even more absurd and should be ended.

It’s racist to assume brown people can’t run equitable societies, although many require reform as happened in the First World regarding women’s rights not that long ago.

WASHINGTON — Attorney General Jeff Sessions on Monday made it all but impossible for asylum-seekers to gain entry into the United States by citing fears of domestic abuse or gang violence, in a ruling that could have a broad effect on the flow of migrants from Central America.

Mr. Sessions’ decision in a closely watched domestic violence case is the latest turn in a long-running debate over what constitutes a need for asylum. He reversed an immigration appeals court ruling that granted it to a Salvadoran woman who said she had been sexually, emotionally and physically abused by her husband.

Relatively few asylum-seekers are granted permanent entry into the United States. In 2016, for every applicant who succeeded, more than 10 others also sought asylum, according to data from the Department of Homeland Security. But the process can take months or years, and tens of thousands of people live freely in the United States while their cases wend through the courts.

Mr. Sessions’ decision overturns a precedent set during the Obama administration that allowed more women to claim credible fears of domestic abuse and will make it harder for such arguments to prevail in immigration courts. He said the Obama administration created “powerful incentives” for people to “come here illegally and claim a fear of return.”

Asylum claims have expanded too broadly to include victims of “private violence,” like domestic violence or gangs, Mr. Sessions wrote in his ruling, which narrowed the type of asylum requests allowed. The number of people who told homeland security officials that they had a credible fear of persecution jumped to 94,000 in 2016 from 5,000 in 2009, he said in a speech earlier in the day in which he signaled he would restore “sound principles of asylum and long-standing principles of immigration law.”

“The prototypical refugee flees her home country because the government has persecuted her,” Mr. Sessions wrote in his ruling. Because immigration courts are housed under the Justice Department, not the judicial branch of government, he has the authority to overturn their decisions.

“An alien may suffer threats and violence in a foreign country for any number of reasons relating to her social, economic, family or other personal circumstances,” he added. “Yet the asylum statute does not provide redress for all misfortune.”

His ruling drew immediate condemnation from immigrants’ rights groups. Some viewed it as a return to a time when domestic violence was considered a private matter, not the responsibility of the government to intervene, said Karen Musalo, a defense lawyer on the case who directs the Center for Gender and Refugee Studies at the University of California Hastings College of the Law.