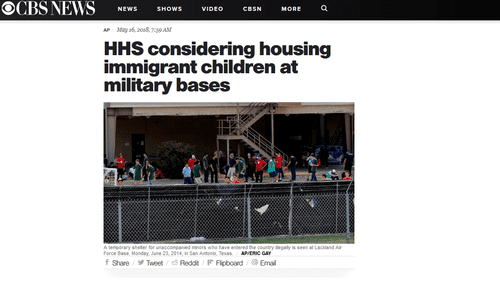 Fate Of Honduran Caravanners STILL Unclear, But Trump MUST Crack Down With Executive Options

Deep State sabotage? After Trump mau-maued Mexico, the Caravan of Death To America By Demographic Replacement did partially disperse. However, two hundred or so Central Americans finally arrived at the San Ysidro Port-of-Entry (POE). And unfortunately most have been allowed into the U.S., at the moment only for processing for asylum applications. [Migrant Caravan: All But 10 Central Americans Now Admitted To U.S. To Apply For Asylum, by Daniel Gonzalez, Arizona Republic, May 4, 2018] At least one (pregnant) mother and her two children appear to have been released, no doubt to disappear into the 20 million or so illegal alien population in the U.S. [Migrant mom Gabriela Hernandez just got to California after weeks in caravan and detention, by Leyla Santiago, CNN, May 14, 2018]

Astoundingly, your humble servant has still been unable to establish what is happening to the rest. They are presumably still being held and may actually be processed and deported.

But chances are good that some, most, or all will be released pending a decision—because of bad advice and possible sabotage by Department of Homeland Security (DHS) and Department of Justice (DOJ) employees, not, at this moment, by kritarchs from the Judicial Branch. Right now, it is all on President Trump and his subordinates

Not all is black pills at the moment though. There continue to be options to quash this looming Camp Of The Saints.

The greatest failure was political, not legal. President Trump failed to properly impress upon Mexico the importance of this issue and the possible consequences.

This, of course, should have been President Trump’s strong suit. This is the man who brought Kim Jong-Il to the negotiating table with threats of nuclear warfare.

Spelling out more consequences of allowing Third-Country nationals to traverse Mexico, either legally or illegally, should have been an easy call. Shutting down a land Port-Of Entry to Mexican nationals, or ordering U.S. Customs and Border Protection [CBP] to do a border slow-down, would have gotten Mexico’s attention, and, more importantly, action. This was actually done when Mexican officials were slow to find abducted DEA Special Agent Kiki Camarena. [Mexico drugs: How one DEA killing began a brutal war, By Will Grant BBC News, February 7, 2012] Or how about another Pershing-style Punitive Expedition?

Clearly President Trump did not get the proper advice and counsel from his DHS Secretary. Is Kirstjen Nielsen a Deep State saboteur? This writer thinks so. She has been a complete failure on the Caravan of Death. But she might just be ignorant of the options given her lack of experience with immigration enforcement.

Politics became subordinate to the law once the illegals arrived at the border. The general view is that asylum applicants have to be accepted, pending processing. I disagree. The law gives President Trump the authority to categorically prohibit the entry of the aliens in the Caravan of Death. All President Trump had to do was refer to his first orders to keep out Muslim terrorists. Title 8 United States Code, The Immigration and Nationality Act of 1952, as amended, Section 212(f), gives the President all the authority he needed to prohibit the entry of the Caravanners of Death. It reads:

President Trump could have easily signed an order prohibiting the entry of these aliens and instructed Customs and Border Protection Officers and Border Patrol Agents at the international border demarcation line to prohibit their entry and to physically remove any who make an attempt.

Trump could even have given himself some cover by notifying those aliens that they could apply for refugee status at the American Embassy in Mexico City or at any American Consulate in Mexico. There, their applications could easily be denied and the aliens become Mexico’s problem.

However, it appears that saboteurs in DHS did not inform the President that he had these options.

The next option, the one we are stuck with now, is actually to process the aliens by the laws as written, not as badly practiced. As I pointed out during the Obama-era kidinvasion, It’s been done before, and successfully, notably by Reagan in 1988.

Even better, since 1988, the laws regarding the refusal of admission of aliens were changed, for the better as written, though not as currently practiced. In the 1996 Illegal Immigration Reform and Immigrant Responsibility Act, Congress made removal of inadmissible aliens much easier and clearly defined political asylum and refugee status.

There were two key reforms:

Credible Fear means that the alien requesting asylum must prove that to continue he has a credible fear, with an emphasis on the credible, of persecution by the government of the country of which the alien was a citizen. But, because of directives going back to the Clinton Administration, the DOJ continues to ignore the Credible Fear part and the persecution-by-government part of the asylum process, accepting unverified claim of victimhood by criminals, spouses, and other such nonsense, as the basis for asylum.

President Trump should change that. He should order his CBP Commissioner to have officers interview for both a credible fear and persecution by a government.

If none is found, the alien can then be subject to immediate deportation under Expedited Removal—without having a hearing before an immigration judge

Fortunately Attorney General Jeff Sessions appears to see this problem, and is quietly seeking to reform asylum claims back to the law as written.[ Sessions tests limits of immigration powers with asylum moves, By Tal Kopan, CNN,March 10, 2018 ]Your correspondent has been critical of Sessions, but this move on asylum is important. So is his decision announced today to end “Administrative Closure,” another Obama Era Administrative Amnesty program. [Jeff Sessions ends Obama-era ‘de facto’ court amnesty for illegal immigrants,  By Stephen Dinan, The Washington Times, May 17, 2018]

Finally, someone in the Trump Administration seems to be trying to get around the Democrat attempt to sabotage enforcement by limiting detention space in the Omnibungle: HHS considering housing immigrant children at military bases,  AP, May 16, 2018.

That may be too late for this Caravan of Death, but it will be waiting when the next ones arrive.