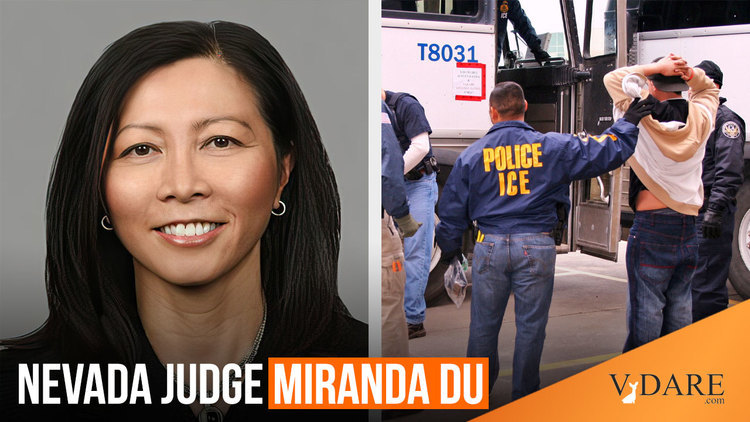 Judge Miranda Du, Viethamese Refugee, And The Dangers Of "Assimilation"

We took in a lot of refugees from Vietnam after it fell. They have assimilated very well to our national culture.

Case in point: Miranda Du.  was born in Vietnam either 51 or 52 years ago, Wikipedia isn't sure. Her Dad had supported our side in that war, so he fled with the family. They ended up in the U.S.A. where Ms. Du got her education, the latter part of it at the University of California in the early 1990s.

University … California … 1990s … you can see where this is going, assimilation-wise. Yes, Ms. Du is as woke as woke can be—thoroughly assimilated into our sick, poisonous, anti-white, nation-destroying elite culture. That's unfortunate as she is now a federal judge: Barack Obama appointed her to the District Court of Nevada.

Judge Du, as I should properly call her, is in the news this week—the immigration news. There is a section of federal law saying that if an illegal alien is deported but then later re-enters illegally, he's committed a felony and can be jailed for up to two years—up to twenty years if his deportation followed conviction for an aggravated felony.

Sounds fair to me. Not to Judge Du, though. She has dismissed a case against a Mexican who had twice been deported but re-entered. What were the grounds for her dismissal? Disparate impact: that longstanding law, she wrote, quote: "was enacted with a discriminatory purpose and … has a disparate impact on Latinx persons."

How dumb is that? Words fail me; I refer you to the comment threads.

The Justice Department could appeal the dismissal; but of course that department is now in the hands of Biden's people and much too busy hunting down white supremacists to bother with trivia like illegal entry. Congress could impeach Judge Du; but that would involve congressional Republicans growing a collective spine, of which I see no sign.

So game, set, and match to Judge Du, and another triumph of assimilation.

KritarchyDiversity Is Strength
<< Previous
Next >>
LATEST