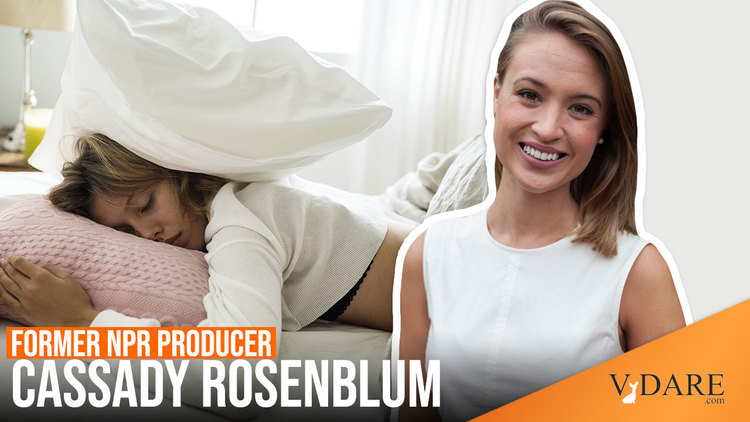 In The NYT, A Jewish Woman Culturally Appropriates The Black-Women-Deserve-To-Be-Lazy-As-Reparations Trend

Ms. Rosenblum is a writer who recently quit her job as a producer at “Here & Now,” a National Public Radio news program, and is living with her parents in West Virginia.

…It’s not just Chinese millennials who are figuring out that work is a false idol. I should know because I’m lying flat too, holed up in my parents’ house in West Virginia. Earlier this year I quit my job producing an NPR program in Boston, and I haven’t been able to stomach rejoining the cacophony of the 24-hour news cycle. I’m far from the only one: A recent tweet that proclaimed “i do not want to have a career” racked up over 400,000 likes. Instead, proclaimed the tweeter, @hollabekgrl, “i want to sit on the porch.”…

The lying flat movement, or tangping as it’s known in Mandarin, is just one expression of this global unraveling. Another is the current worker shortage in the United States. As of June, there were more than 10 million job openings in the United States, according to the most recent figures from the Labor Department — the highest number since the government began tracking the data two decades ago. While conservatives blame juiced-up pandemic unemployment benefits, liberals counter that people do want to work, just not for the paltry wages they were making before the pandemic.

Both might be true. But if low wages were all that’s at play, we would expect to see reluctant workers at the bottom of the socioeconomic ladder, and content workers at the top. Instead, there are murmurs of dissent at every rung, including from the inner sanctums of Goldman Sachs, where salaries for investment bankers start at $150,000. …

In the United States, Black activists, writers and thinkers are among the clearest voices articulating this spiritual malaise and its solutions, perhaps because they’ve borne the brunt of capitalism more than other groups of Americans. Tricia Hersey, a performance artist and the founder of the Nap Ministry, an Atlanta-based organization, is one of them. Ms. Hersey says she discovered the power of naps during during a draining year of graduate school at Emory University, an experience that inspired her to bring the gospel of sleep to fellow African Americans whose enslaved and persecuted ancestors were never able to properly rest. She argues that rest is not only resistance, it is also reparation.

Ms. Hersey now leads events across the country focused on the transformative power of rest, and she has influenced other Black intellectuals, including Casey Gerald, the author of the transcendent essay “The Black Art of Escape.” In it, Mr. Gerald reflects on a year he spent in what he calls a “disappearing act,” lying flat in Texas, ignoring the calls of friends and admirers to join them in the fray of protest politics, which he’d come to view as a sure path to self-annihilation. “Claim your inheritance,” Mr. Gerald enjoins. “Miss the moment. Go mad, go missing, take a nap, take the day, drop a tab. You’re free!”

On Juneteenth this year, Mr. Gerald stayed true to his argument. “I ain’t writing nothing for Juneteenth,” he tweeted. “I’m gonna be drunk on the beach in Galveston with my boyfriend. Love to the ancestors, lemme know when the reparations check arrives. Good luck! ♥”