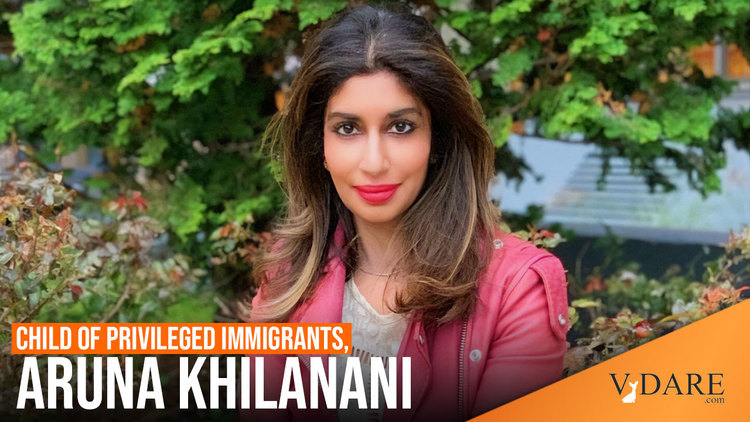 Earlier: Aruna Khilanani, Child Of Privileged Immigrants, Hates The White People She Was Raised With

Everybody is talking about some lady psychoanalyst of Pakistani descent who gave a speech at Yale Law School on “The Psychopathic Problem of the White Mind” that sounds like some 1980s Eddie Murphy routine about “Kill My Landlord” or “Kill the White People.”

‘The Psychopathic Problem of the White Mind’

A psychiatrist lecturing at Yale’s Child Study Center spoke about ‘unloading a revolver into the head of any white person that got in my way.’

A few weeks ago, someone sent me a recording of a talk called “The Psychopathic Problem of the White Mind.” It was delivered at the Yale School of Medicine’s Child Study Center by a New York-based psychiatrist as part of Grand Rounds, an ongoing program in which clinicians and others in the field lecture students and faculty.

When I listened to the talk I considered the fact that it might be some sort of elaborate prank. But looking at the doctor’s social media, it seems completely genuine.

Here are some of the quotes from the lecture:

This is the cost of talking to white people at all. The cost of your own life, as they suck you dry. There are no good apples out there. White people make my blood boil. (Time stamp: 6:45)

I had fantasies of unloading a revolver into the head of any white person that got in my way, burying their body, and wiping my bloody hands as I walked away relatively guiltless with a bounce in my step. Like I did the world a fucking favor. (Time stamp: 7:17)

White people are out of their minds and they have been for a long time. (Time stamp: 17:06)

We are now in a psychological predicament, because white people feel that we are bullying them when we bring up race. They feel that we should be thanking them for all that they have done for us. They are confused, and so are we. We keep forgetting that directly talking about race is a waste of our breath. We are asking a demented, violent predator who thinks that they are a saint or a superhero, to accept responsibility. It ain’t gonna happen. They have five holes in their brain. It’s like banging your head against a brick wall. It’s just like sort of not a good idea. (Time stamp 17:13)

We need to remember that directly talking about race to white people is useless, because they are at the wrong level of conversation. Addressing racism assumes that white people can see and process what we are talking about. They can’t. That’s why they sound demented. They don’t even know they have a mask on. White people think it’s their actual face. We need to get to know the mask. (Time stamp 17:54) …

Katie Herzog, who wrote yesterday about the spread of wokeness in medicine, interviewed the psychiatrist who delivered the talk, Dr. Aruna Khilanani.

KH: Your bio online says you are a “Forensic Psychiatrist and Psychoanalyst, with expertise in violence, racism, and marginalized identities. I left academic institutions because of institutional racism. Word.” Tell me about that. What happened?

Q. Do you have examples of what you experienced?

A. Sure. When I was at Cornell, I got beat up by a patient’s family member. I have a friend who is blonde and when she got threatened [by a patient] I think they did a Grand Rounds or a talk or some kind of symposium. They really addressed it. She was given a lot of support. And I’m not even sure if she was actually hit or not.

Now, when that happened to me, and I actually got beat up, the way they responded was, “Well what do you think you did to elicit this?” That’s the question I got. Like I must have done something to provoke the attack.

Q. Did you file a complaint?

A. No, because the more that you push back, the more they are going to keep attacking you. Also, in my first year, along with another person of color, I had the most Saturday call. These things are not incidental. There was a meeting where they actually tried to take away my vacation from me.

A. They came up with this idea that since I hadn’t put the request on the calendar then they’re not going to give it to me. So that one I did push back on. That one I reported. It was a very chilling conversation that I had with somebody. This is how these chilling conversations go. It’s never through email. They’ll call you on the phone and say, “We need to talk to you about something,” because they never want any of this stuff documented. They’ll be like, “Since you didn’t put this on the calendar, you’re not allowed to have vacation.” And I said, “So-and-so and so-and-so didn’t put it on the calendar. Why do they get vacation?” And they’re like, “Do you really want to put yourself in the position where you’re pointing out your colleagues’ stuff?” Like they needed to make me the person who is calling out my colleagues — not that it was unfair.

Q. When was this?

I want to make a few boring points:

First, an awful lot of Wokeness seems to be motivated by old, tedious resentments over office politics imbroglios. For example, over a dozen years ago, this woman got into a spat with her bosses over scheduling vacation time, and this incredibly dull and trivial dispute has apparently taken up a large space in her brain ever since and become one of the bases of her theories about how black rage justifies her Pakistani peevishness.

Second, an awful lot of Wokeness is driven by foreign elites, like this daughter of two Pakistani doctors, trying to horn in on African-American victimization chic. For example, Dr. Khilanani has psychoanalyzed liberal white American women and discovered that their White Guilt is over, not slavery or Jim Crow, but instead “colonialism:”

Q. Do you think that it’s your mission or your job or your duty to get to the root of a white person’s racism or deal with their whiteness?

A. No. That makes it seem like it’s for me. If I were to do that it would be selfish as fuck. Do I focus on ways I think race is seeped into everything, yes, but it’s not for me. I can actually see how white people are suffering in a way that is very unique and different from people of color.

Q. What is the difference between white peoples’ suffering and the suffering of people of color?

Q. What would you say is the cause of this?

A. I think it’s colonialism. That history. If you do this much lying to yourself it’s going to have an effect on your mind. There’s no way it can’t.

Q. How do you see the after-effects of colonialism manifesting itself in the white mind today?

A. It’s going to be hard for me to give you a one sentence soundbite on this but I would say, a high level of guilt. I’ve never seen anything like this before. Other than in white people not eating bread, an incredible level of shame. Feeling really exposed all the time. A lot of perfectionistic tendencies. Not letting themselves move forward. Experiencing themselves as passive a lot. …

Q. Let’s talk about your practice. You’ve mentioned that you treat a lot of white people and you treat “whiteness.” What is the distinction between the two?

A. I wouldn’t say there is a distinction. For example, for white women, I do help a lot with passive-aggressiveness — not being able to use their voice, say things, feeling like there will be a negative consequence. White people have an intense level of guilt. I have never seen a level of guilt that I see among white people. I mean, white people don’t eat bread. Think about that. There have been wars all over the world over grains and bread and only here, white people are depriving themselves. Think about that shit. Everyone has this gl

Her initially crazy-sounding “white people not eating bread” is a dig at upscale liberal white women who have decided they have gluten allergies. It’s not a bad bit, but Seth Rogen did it better in 2013:

In reality, of course, virtually zero liberal white American women feel guilty over white Americans colonizing anywhere, such as Puerto Rico or the Philippines, much less over Britain colonizing Pakistan before they were born. South Asians are waaaaay down the totem pole of intersectional Pokemon points in the U.S. But that still doesn’t stop South Asian immigrant intellectuals from arguing that they deserve to take over America as reparations for the Raj. For example, from my 2019 review of Calcutta-born NYU journalism professor Suketu Mehta's book This Land Is Our Land: An Immigrant’s Manifesto:

He’s been living in the United States of America since his Gujarati diamond-merchant family arrived in Queens in 1977. As he sums up his manifesto:

“I claim the right to the United States, for myself and my children and my uncles and cousins, by manifest destiny…. It’s our country now.”

Of course, exactly why Americans merit vengeance for the sins, real and imaginary, of the British Raj isn’t fully explained in This Land Is Our Land. But that’s not the point; the point is that you white people have money, which means you are guilty, and therefore you must pay.

Seriously, in the current Scramble for America, the potential profits for colonizers like the Mehtas are so vast that it’s only natural for their pundits to not wait around to publish until they’ve first figured out arguments that can pass the laugh test.