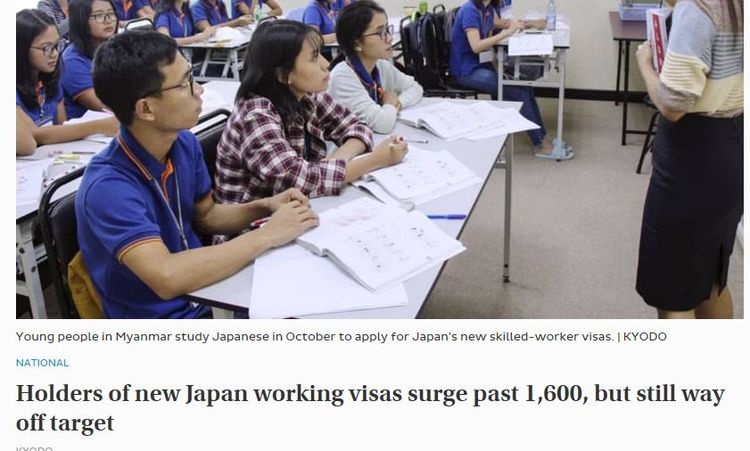 Japan has been modifying immigration policy recently related to temporary foreign workers.  Despite the fact that these foreign workers are temporary, cultural assimilation is an important part of the immigration program.  No Japanese wants to flood their nation with unassimilable foreigners, including Japan’s ruling elite.  Your humble correspondent was recently in the Land of the Rising Sun and can attest to that fact.  I had some experience with foreign workers in the hospitality industry in Tokyo and can attest that unlike in the United States where legal foreign workers are generally incompetent and cannot communicate in English, the opposite is true in Japan.

The number of foreign residents who have received a new skilled worker visa totaled 1,621 as of Dec. 31, the immigration agency said Friday, falling far short of the program’s target for the first year.

While the figure was up more than sevenfold from the end of September, it was far behind the maximum of 47,550 that the government was hoping would obtain the Specified Skilled Worker visa by the end of March.

An important part of the program selects for assimilation to Japanese culture, both in language, previous successful experience in Japan as a worker, Japanese work training, and even by default, race; the East Asian racial type is favored, with few South Asians and Blacks.

Vietnamese accounted for 910 of the visa holders, followed by Indonesians at 189 and Filipinos at 111, according to the Immigration Services Agency, which releases the figure every three months…

To qualify for the visa, an applicant must pass skill exams and Japanese-language tests or have participated in Japan’s technical intern program for at least three years.

According to the agency, 1,486 foreign nationals, or more than 90 percent of the total, used the latter route to acquire the visa.

And there is even a little Bureaucrat Game going on, while tens of thousands of visas are available, less than 1,500 were taken.  A little immigration is good, too much is bad.

Japan is being very careful about immigration and its impact.  Once immigration begins to negatively affect a host nation, corrections are much more difficult.  The Japanese are managing this well.

What they should do as well is institute natalist policies like Hungary and Poland to encourage to native Japanese to increase their birth rate.