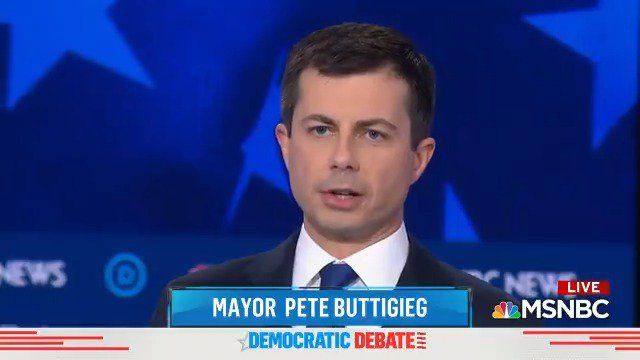 With the exception of Buttiegieg's stupid joke that Trump was "relying on 17th century security technologies like a moat full of alligators or a big wall" (which was actually about Trump and foreign policy) there was no mention of immigration in the recent Democrat debate.

If you click on New Hampshire Democratic Debate Transcript, February 7, 2020, and control+F the text string "migr" you get nothing. No mention of immigration, immigrants, migrants, emigration...nothing.

It's like they're all agreed on Open Borders but don't want the voters to know.

Buttiegieg's joke, by the way, was the kind of thing that if Trump said it, the NYT would headline with language like "Trump's false claim".

Mayor Buttigieg: "We do not have a 21st century strategy coming from this president. After all, he's relying on 17th century security technologies like a moat full of alligators or a big wall." #DemDebate pic.twitter.com/JXrkZjm6Jj

It's false to say that Trump has no foreign policy; many of his critics feel he has too much, although his demarche to North Korea is so far more successful than previous Presidents, and he has manage to get the OTHER members of NATO to contribute to their own defence.

It's false to say that Trump seriously wants a "moat full of alligators"—that's just something someone leaked to the New York Times.

It's false to say that a big wall is a "17th century security technology"—walls date back millennia (Hadrian's Wall, Great Wall of China) and have been of major importance in the 20th Century Cold War (Berlin Wall) and have been increasing all over the world in the 21st century a trend known around here as "The New Muralism".

See Border Walls Work...All Over The World, for examples. It would be great, for example, if Trump were able to build something like Israel's 21st Century fence.

It's false to say that America's security is enhanced more by sending gay McKinsey employees to play soldier in Afghanistan than it is by defending America's Southern Border.

Pete Buttigieg is misleading voters about his ‘military’ record. He pulled some strings and got in with no training, no boot camp, no anything and very briefly did office work in a cubicle on a base in Afghanistan for a few weeks and quickly left: https://t.co/tSBqJEgBzK

Defending borders is what armies are for.

But how could any of these candidates defend the country from an invasion of illegal immigrants when they won't even admit it's happening?