The preliminary birth figures for 2017 are in. The following graph and table show the percentages of births by state that were to non-Hispanic white babies: 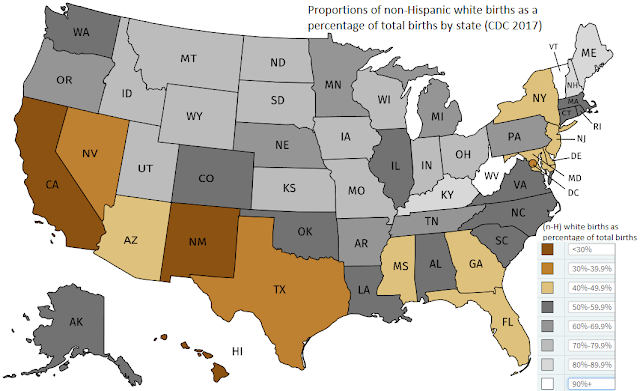 The hoped-for Trump bump failed to materialize. Total births were down from 2016, as was the national percentage of births to white babies.

At 51.7% in 2017, we are fast approaching the point where non-white births outnumber white births in America. If it doesn't happen this year, it looks like it will happen in 2019. I expect members of the intellectual dark web will complain the media isn't giving Trump the credit he deserves for being in office when non-white babies outnumbered white babies for the first time when the historical milestone is reached!

As has been pointed out numerous times previously, the sensational assertion based on Census estimates that this happened back in 2012 will turn out to merely be six or seven years premature.

The four most populous states in the union are now natally majority-minority. In California, barely one-in-four babies are white. Future president Kamala Harris is California Dreaming this for the entire country.

In Texas, it's one-in-three. The putatively rock-ribbed Republican stronghold is undergoing a demographic transformation that will turn it purple and then blue. Texas is to my knowledge the only state in the country where whites vote more strongly Republican than non-whites vote Democrat. They do so only marginally, though--the white and non-white votes are essentially the inverse of one another. This means when non-whites reach an electoral majority in the lone star state, it'll move to the Democrat column. The writing is on the exit polling walls: 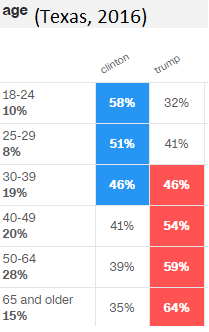 The Southwest is lost. It's past time for political dissolution. A decade ago, we were mocked for advocating secession. In a decade, we'll be on the cusp of it.

Parenthetically, a common response I hear when political dissolution is brought up is that the smaller political entities crawling out of the national carcass will, individually, all be demographically overwhelmed just as the country as a whole is now.

I don't buy it. Imagine Brussels has the same power to determine immigration policy for the EU that the Imperial Capital currently has in the US. The Visegrad group would be powerless to keep the invaders out.

Now imagine the states have the power to defy the Imperial Capital as individual European countries are currently defying Brussels. In my home state immigration patriot Kris Kobach is running neck-and-neck with the current governor for the upcoming August primary. If instead of governor Kobach of Kansas we had president Kobach of Kansas, our government's approach to invasion would look a lot like Hungary's does.