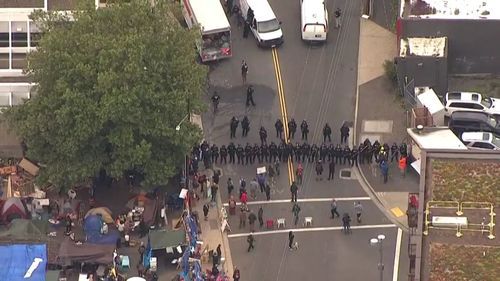 Jeff Sessions has has apparently had a fire lit under him and an Obama #DeepState holdover, L. Erik Patterson, is also feeling the heat on the rise of Antifa terrorism in Portland.  “It’s Going Down” refers not onlyto the Antifa terrorist front group that telegraphs and organizes various attacks by the black clad communists, but also the heating up of the once Cold, but soon to be Hot Civil War 2.0.

As your correspondent pointed out earlier this week, Communists, always misidentified as anarchists and protesters, shut down the ICE Enforcement and Removal Operations (ERO) office in Portland, OR. This is part of a wider campaign of signaling by the Democrat Party to its terrorist front groups that violence is back on the table, or more accurately, a signal to increase violence, as the Democrats since 1917 have always used Communist violence in the United States to achieve their ends.

Remember, Bill Ayers is and was a Democrat.  Terrorism is part of the plan, and get ready for the bombing campaign.  Not just a throwback to the Bill Ayers bombing campaigns of the 60s and 70s,  think Haymarket or Wall Street bombings--the Democrats are advocating a return to mass violence and bombing.

The U.S. had thousands of domestic bombings per year in the early 1970s. This is what happens when citizens decide en masse that their political system is corrupt, racist, and unresponsive. The people out of power have only just begun to flex their dissatisfaction. The day will come, sooner that you all think, when Trump administration officials will look back fondly on the time when all they had to worry about was getting hollered at at a Mexican restaurant. When you aggressively f*ck with people’s lives, you should not be surprised when they decide to f*ck with yours.

War has been declared.  And now we will hopefully get that spark that starts the Democrat Party down that road.  Sessions has informed the Antifa terrorists that if they do not evacuate the occupation of the ICE office, they will be arrested.  Antifa said bring it on.

“It is unlawful under federal law to obstruct the entrances, foyers, lobbies, corridors, offices and/or parking lots of federal facilities,” reads the flyer Federal Protective Service agents distributed to protesters, who have blockaded the Southwest Macadam Avenue facility since last week.

Those who obstruct the entrance to the building, according to the flyer, face arrest and prosecution in federal court. However, officials acknowledged they had no authority over adjacent properties owned by other entities.

Antifa welcomed the challenge, apparently thinking this will be the start of the Revolution they always are predicting.

“People are going to do whatever it takes,” said Jacob Bureros, with Direct Action Alliance, an Antifa group that helped organize the occupation. “If they arrest us on federal property, we’ll shut the roads down. You can’t stop us. They’re going to find out that this city has more resolve than they do.”

There we have it.  The terrorists have laid down a marker.  They will fight.  This is treason, sedition and rebellion, violations of Title 18 United States Code (USC) Section 2381, Treason, Title 18  USC Section 2384, Seditious Conspiracy and Title 18 USC  Section 2383, Rebellion or Insurrection respectively.

While the local authorities, both the Mayor of Portland and the Governor of Oregon are doing nothing (in fact encouraging such rebellion and sedition by their public statements in support of this treason)  there is also nothing preventing President Trump calling the National Guard into Federal service to help secure ICE facilities.  This will be necessary because the Federal government does not have enough agents, Deputy Marshals, and officers in Federal law enforcement to secure those facilities.  President Trump can also call up the militia in Oregon and other States to suppress this rebellion.

While Oregon is dominated by squishy soyboys and SJWs in Portland and the coasts, the rest of Oregon is redneck as heck, and well armed.  Those patriots will rally around the flag and answer the call to armed action against the terrorists. Imagine thousands of well armed Oregonian men showing up the Antifa riots and suppressing the rebellion with ruthless coercion.  Rural Oregon is Trump country and they will enjoy finally showing the coastal elites who is boss; political power comes out of the barrel of a gun.  And the soyboys have no guns.  The Portland Police Bureau is predominately working-class whites and the same with the Oregon State Police.  They will obviously side with President Trump, defying their corrupt managers and politicians.

I say give Antifa and the Democrats what they want, suppress their treason and rebellion with ruthless coercion.  Time to show the terrorists who is boss.

This was written last night. This morning we saw this:

Federal officers in riot gear moved into the protest siege of ICE headquarters in Southwest Portland at 5:30 a.m. Thursday.

It’s going down—but our way, not theirs.