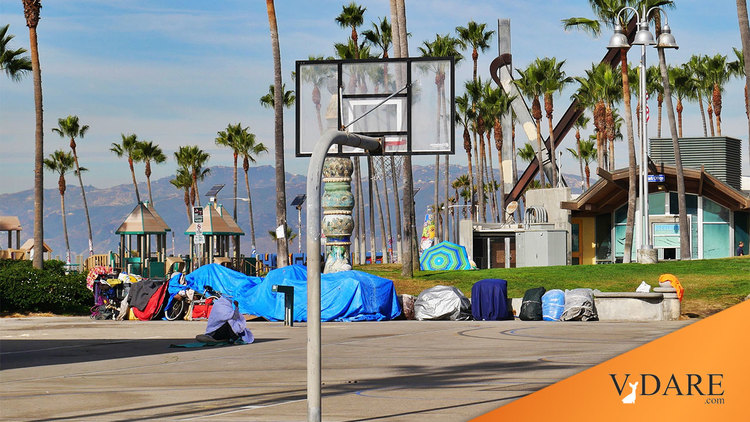 It's Almost As If Spending More On The Homeless Invites In More Homeless...

Since the invention of polyurethane wheels in the late 1970s, Los Angeles’s Venice Beach has been wildly popular with tourists.

For the past few months, the sheriff’s department and outreach teams have walked along the boardwalk, spoke with homeless people and offered housing and mental health services.

According to [L.A. County Sheriff] Villanueva, during their outreach over 250 homeless people were interviewed. During that interview, the sheriff’s department gathered stats on their age, gender, race and location of origin.

Villanueva said majority of the homeless people in Venice came to California from other states. He said 23 states were listed as location of origin including, Ohio, Texas, Maryland, Louisiana and even countries such as Iraq, Germany and Mexico.

According to data they collected, 70% of the Venice homeless population is male, 29% is female, 1% identify as transgender, 57% were White, 24% were Black and 13% were Hispanic.

While discussing the homeless crisis on Facebook Live, the sheriff stated that LA County has half of the state’s entire homeless population. According to the Los Angeles Homeless Services Authority, in 2020 over 66,000 people in Los Angeles County were experiencing homelessness.

The sheriff said in the past 10 years $6.5 billion has been spent to address the homeless problem in LA County.

“Governor if you wish to have them on your vineyard, in your property, in our mansion by all means you have the freedom to invite them there, but here in LA County we are pretty much full,” the sheriff exclaimed when referring to Governor Newsom’s California Comeback Plan.

On Monday, Newsom addressed the state's homelessness crisis from the city of Sebastopol in Sonoma County where he signed a $12 billion bill for homeless funding.