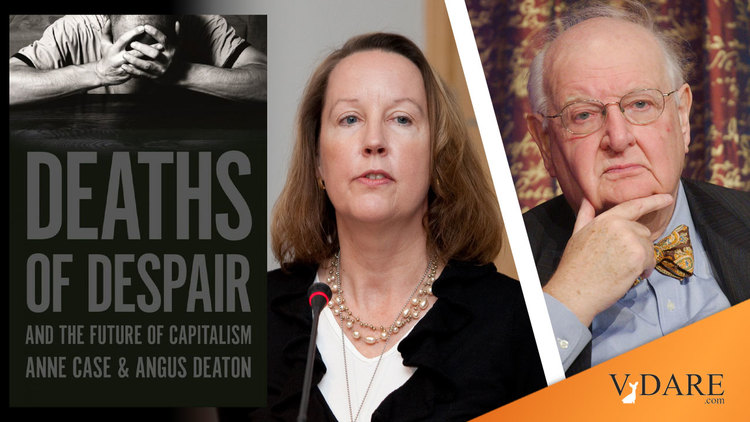 Deaths Of Despair:  NYT’s David Leonhardt Interviews Case And Deaton But Skips Past The White Suffering

Every morning I get a free e-mail roundup from the NYT’s David Leonhardt, who has shown some levelheadedness in his writing despite working for, you know, The New York Times.

Yesterday, he sent out his mini-interview with Anne Case and Angus Deaton, who have elsewhere famously identified that white life expectancy is falling [Life Expectancy, Falling, by David Leonhardt, July 22, 2021].

In reading their work, I was reminded of some Robert Putnam/Bowling Alone reasons that could be in play here, i.e., we are social creatures, and when you strip away healthy social interactions you get increased depression and death. Liberalism has done a fine job of stripping, since so many of our social interactions happened in all-white or single-sex groups that are now verboten.

The impact of Covid deaths is bringing this into sharper relief, since so many of them are accompanied by government-forced social isolation.

But I am absolutely convinced that there has been a precipitous decline in white mental health in the United States.  And that the loss of working class jobs is just a small part of the cause. Our demographic displacement/replacement is the bigger driver.

A brave academic should take a look.