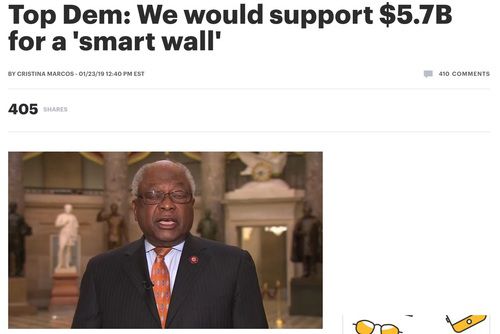 Dems Want "Smart Wall"; So Much For "Too Expensive" Talking Point

Considering the many ridiculous things the federal government spends money on, opposing a border wall because it is "too expensive" is absurd on its face. Nontheless, that is the line many of the Democrats have used when opposing border security. Back in April 2017, Nancy Pelosi claimed the wall it is "expensive" while also simultaneously claiming it is "immoral". [Nancy Pelosi: Border wall is 'immoral, expensive, unwise," by Kailani Koenig, NBC News, April 23, 2017] Bernie Sanders claimed in late December it was a "waste of money". [Bernie Sanders: Border Wall Is A Waste Of Money and I Won't Support It, by Tim Hains, RealClearPolitics, December 23, 2018]

Yet now Democrats seem to believe that it isn't the money that's the problem; it's the fact that it's a real wall.

House Majority Whip James Clyburn (D-S.C.) on Wednesday said Democrats would be willing to provide $5.7 billion in border security funding to end the shutdown if the money is used for measures like a "smart wall."

"Using the figure that the president has put on the table, if his $5.7 billion is about border security then we see ourselves fulfilling that request, only doing what I like to call using a smart wall," Clyburn told reporters after a Democratic caucus meeting. "These are the types of things that we are going to be putting forward."

Thus, the debate now isn't really about the cost, it's about what would work. As Byron York argues, an effective wall has to keep aliens out of the country altogether, not simply track them as they come in and claim asylum.

[A "smart wall"] can detect illegal crossers and alert authorities to their presence. But it does nothing to keep them from entering the country.

That is especially important given the nature of the migrants crossing the border illegally today. In the past, many were single adult men who could be caught and quickly returned to Mexico. But now, according to the Department of Homeland Security, about two-thirds of the crossers are families and unaccompanied children who, by U.S. law, cannot be quickly returned. Once in the United States, their asylum claims — the vast majority are ultimately judged without merit — take a long time to process. During that time, many simply disappear into the country.

The point, for those illegal immigrants, is not to enter the United States without being detected. It is to enter, be caught, and begin the asylum process that will allow them to stay, one way or the other.

This seems like a major concession by the Democrats. It's just a question as to whether "moderate" Republicans like Senator Cory Gardner will break before President Trump can get the funding he needs.