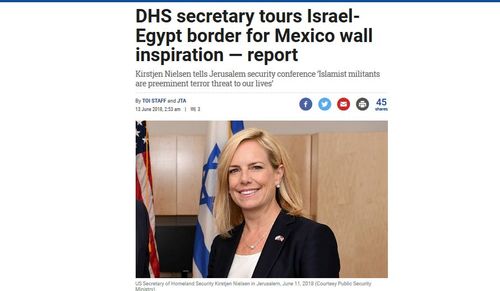 From the Times of Israel

US Homeland Security Secretary Kirstjen Nielsen toured Israel’s border barrier with Egypt Tuesday [June 12th] and received a briefing on Israeli border technology to take away lessons for the US-Mexico border, Israel Radio reported. Nielsen later confirmed the tour to an Israeli security conference in Jerusalem, saying: “Border security is national security. Our Israeli partners know that better than anyone, and I was fortunate today to see the incredible work they are doing to keep their territory safe.”

Great. Now let’s get ours built. And why not put the military on the border while you’re at it?

This article here has some information about Israel’s border barrier with Egypt including the photos of the previous fence which wasn’t effective enough. The main purpose of the barrier was to stop African illegal alien infiltrators from entering. The fence was very successful and note that Egypt did not object to the building of the fence.

So what are we waiting for?