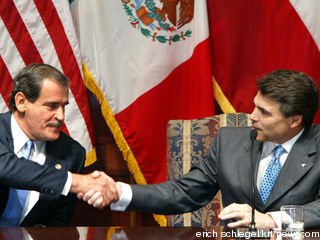 Is Rick Perry's Sputtering at Trump an Attempt to Mask His Own Deceit or Just a Media Ploy?

Donald Trump’s surprise emergence as the Republican frontrunner because of his tough talk about immigration has highlighted the issue and created interesting reactions among the other candidates. Rick Perry has taken to sniping at Trump, calling the billionaire businessman a hypocrite who employs illegals and a “cancer on conservatism.”

Perry says, that as a former Texas governor, he’s the guy who’s been there (the border) and done that (enforcement). His campaign page states, “No governor in the country has more first-hand experience with the federal government’s long-time failure to secure the border than Gov. Perry.”

Funny, but I have a different memory, that Perry was an open borders sort of politician, even professing to that dubious faith during a 2007 speech in Mexico. While on a trade mission in Mexico City, he remarked that he supported the “free flow of individuals between these two countries who want to work.” During a 2011 campaign trip in New Hampshire, AP reported he said, “No, I don’t support a fence on the border.”

Speaking of Mexico, Perry maintained a friendly relationship with the Presidente Vicente Fox (pictured below) based on Perry’s generosity with Texas resources toward Mexicans in terms of jobs and subsidized education. 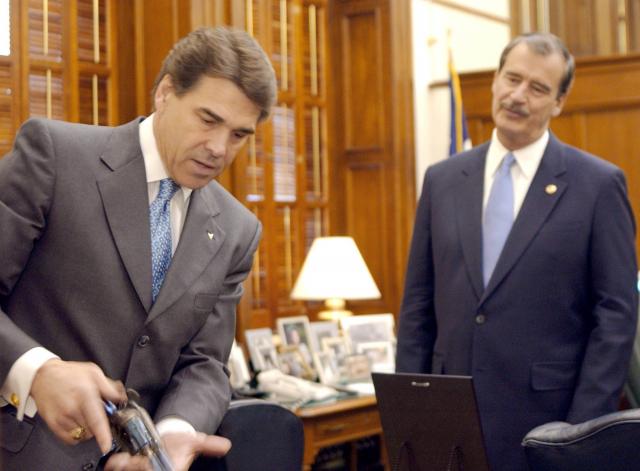 Perry was roundly criticized in a 2011 presidential debate by the other candidates as being a squish, particularly regarding Texas’ tuition subsidies for illegal alien kiddies. Perry got a lot of attention for declaring, “But if you say that we should not educate children who have come into our state for no other reason than they’ve been brought there by no fault of their own, I don’t think you have a heart.”

In fact, he had to apologize for insulting the friends of law and sovereignty. Interestingly, a Rasmussen poll from that year found that 81 percent of voters objected to taxpayer-subsided in-state tuition for illegal alien college students.

As governor of Texas, Perry favored an assortment of liberal immigration policies, including the rejection of e-verify and promoting work visas for the Mexican masses. Plus he pushed hard for the Trans-Texas Corridor, a globalist scheme of massive toll-roads criss-crossing the state.

Former Congressman Tom Tancredo ran for President in 2008 to spotlight immigration anarchy and he recently recollected how useless Perry was about the issue during in interview on Newsmax TV with Steve Malzberg.

MALZBERG: I had Jim Abbott, the current governor of Texas on the show couple weeks ago and I asked him if Trump’s earlier attacks on Perry about doing nothing for the border were warranted, and he kind of sidestepped that. He didn’t rush to the defense of Governor Perry. What kind of job do you think Perry did in Texas as governor when it came to the border?

TANCREDO: Let me tell you, he was absent without leave for a large part of his career there. We tried, again I must tell you, how many times even during the 2007 election, we would try to get that — you know the whole reason I was running for that primary, the presidential primary, had only one purpose, to get everybody to talk about issue. He was one that we were trying desperately to get to discuss it, yet at the time was also looking at that possibility of running for president but he wouldn’t do it, he wouldn’t touch it. In fact he attacked me during that period time, saying that you could be for border security, but you don’t have to be like Tancredo, whatever that means. And he stayed away from it completely.

It’s amazing that we go through the same stuff again and again, and these political hacks flip-flop this way and that, like nobody will remember their records. Perry acts indignant about what Donald Trump has said about immigration, but Perry’s history bears no scrutiny at all.