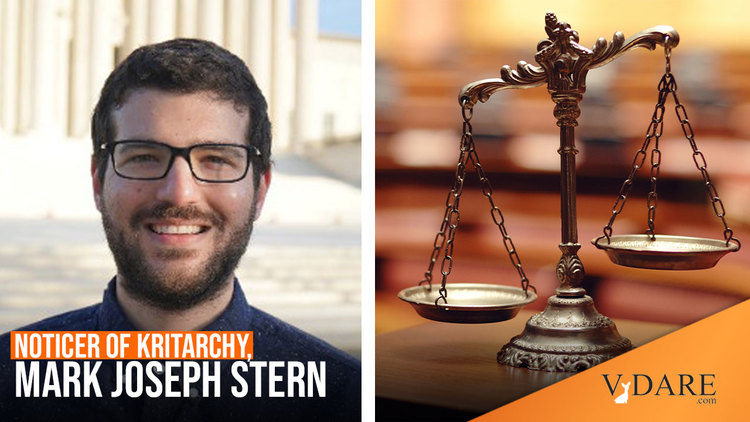 While I am not the only noticer regarding kritarchs and kritarchy at VDare.com, I can humbly say that I am the most prolific writer at VDare, and on the internet in general, about kritarchs and kritarchy. When a Muslim kritarch, Afsaneh Ashley Tabaddor, noticed my writing, although a little late, as I have followed her since 2014, she immediately went public with a complaint, in part to cover her misconduct in office, which even the Obama Regime found egregious. Tabaddor, who in all her public representations does not use Afsaneh, her true and correct name, but goes by A. Ashley Tabaddor, has since been promoted by the Biden Regime to Chief Counsel to U.S. Citizenship and Immigration Services (USCIS), so I will conclude she is a partisan hack. I’ll bet Lindsey Graham voted to confirm her, the same guy who told President Trump he would not accept Kris Kobach in any position in the Trump Administration.

Much ink was spilled about my post concerning noticing and mentioning kritarchy being anti-Semitic . That is, of course, nonsense. There are lots of Semites in this world, the Arabs being one group in that classification, with the historic Mesopotamia being filled with Semitic  groups like Kassites, Amorites, etc. The word kritarchy and kritarchs are of Greek origin, though the term sometimes refers to the rule of the Jews by judges during a period before the rise of Jewish monarchs—i.e. in the Book of Judges.

My post was ably defended by VDare writers. [Bill Barr Moving To Control The Immigration “Judges” By Decertifying Their Union, by Federale, VDare, August 19, 2019]. My defense is that opposing, much less noticing, is not anti-Semitic  in any sense, unless those making the accusation think that Jews are involved in overturning the Constitution to establish a kritarchy.

In any event, Tabaddor is a White Aryan Muslim from Iran, the land of the Aryans. Criticizing her cannot be anti-Semitic  in any interpretation. Sadly though, most of the criticism of my post neither linked to my post nor mentioned me by name. I found only one angry leftist who made the effort to mention me and link to the post. Kudos to NoMoreMisterNiceBlog for naming and linking. He did more than Kevin Williamson at National Review.

But why am I rehashing history and internet infighting? Because it is now official, the Jewish position on kritarchy is in. It is not anti-Semitic  to notice it and it is a good thing, but only for leftist policies.

Recently the radical left, including many top Jewish legal scholars, have noticed kritarchy, in that kritarchy can go both ways. Today is a red letter day for left-wing Jews noticing kritarchy, as a Trump-appointed District Court Judge has struck down the mask mandate imposed by the Center for Disease Control (CDC) on all public and private commercial, from airlines to taxis, transportation.

A federal judge in Florida struck down on Monday the Biden administration’s mask mandate for airplanes and other public transport methods.

U.S. District Judge Kathryn Kimball Mizelle said the mandate was unlawful because it exceeded the statutory authority of the U.S. Centers for Disease Control and Prevention and because its implementation violated administrative law.

It is unclear clear how quickly the ruling will be implemented at airports or train stations across the country, or if the Justice Department will seek an order halting the ruling and file an appeal.

Just last week, the CDC extended this mask mandate through May 3. The masking requirement applied to airplanes, trains, and other forms of public transportation.

The left is all in a huff about “Trump judges” over this, and they have noticed that other Federal judges are striking down Deferred Action For Childhood Arrivals (DACA) and Biden misconduct over immigration. They certainly don’t like it when the shoe is on the other foot.

But we have a special reaction from Slate's Jewish legal correspondent and scholar, Mark Joseph Stern. He has his panties in a twist about unqualified Trump judges acting like, well, kritarchs, ruling the nation from the bench undemocratically, thwarting the President of the United States! Nor was he happy about being exposed as a hypocrite.

The federal judiciary is our nation’s chief policy-making institution—by far the most powerful and least democratic branch of government—yet the vast majority of political reporting covers Congress and the White House, which are mostly sideshows. This is very strange to me.

That sounds like a description of the state of our democracy: All important decisions are made by judges, as in a kritarchy.

Stern is, of course, the vilest of hypocrites—the decision he was cheering 2017 was Judge Ann Donnelly attack on the so-called Muslim ban, which, like the one from the judge in Hawaii, was reversed by the Supreme Court.

Nor is he self-aware either.

Another Trump judge issues another nationwide injunction while pretending to be wary of its legality. Hard to overstate the brazen hypocrisy here. https://t.co/O3BoVTGdGr pic.twitter.com/sANRMHP9an

And let us make it clear he is only opposed to kritarchy when it is a “Trump judge” overturning a Democrat President.

But it is different when Stern does it, as he has a new word for “kritarchy,” it is “juristocracy,” which is not yet a word, at least according to my spell-check. But is it anti-Semitic to notice juristocracy? And what, pray tell, is the difference between juristocracy and kritarchy? Is it that juristocracy is of Latin derivation and kritarchy comes from the Greek?

Try explaining to your friends in other liberal democracies that a single unelected, life-tenured, 35-year-old judge just abolished the air travel mask mandate for the entire country.

No peer nation would tolerate such a power-drunk juristocracy. Our system is badly broken.

Stern really understands the problem we have with a judicial dictatorship, that I can hand to him. It is just that the basis for his decisions is not actually in the Constitution, like say the Heller decision, which actually concerns something mentioned in the Constitution, unlike abortion or immigrant rights.

He is also concerned about our judicial rulers' longevity, though I doubt if he said the same thing about Ruth Bader Ginsburg ruling the United States well into her 80s, except that he likely thought she should have retired under Obama.

Anyway, there's a pretty good chance Kathryn Kimball Mizelle will still be ruling us 2072 when she's in her 80s. That's the future we're condemning ourselves to if we unquestioningly accept rule by Trump judges. That's what Democrats are embracing when they oppose court reform.

Yes, rule by RBJ is good, rule by Kathryn Kimball Mizelle (KKM) not so good.

RBG. You've heard her amazing life story. You've seen her face on everything. But what do you know about her jurisprudence, her writing, and her legal legacy? I'm partnering with @chapter_HQ to teach a four-week course on Ruth Bader Ginsburg, the justice. https://t.co/zzR3tsYDSj

More important, do we have anti-white racism here? Stern objects that KKM, Peace Be Upon Her, is from Tampa. No doubt Stern sharply criticized Attorney General Jeff Sessions when he complained about a single judge out in the middle of the Pacific making life- altering decisions about immigration law.

And, yes, kritarchy is fine when it involves overturning Muslim bans; mask bans by executive order, not so much.

Trump's executive order is an unconstitutional attack on Muslims that must be struck down in its entirety.https://t.co/0MT5s0luC6 @Slate

So, with enough hypocrisy to go around, we now know that noticing kritarchy, much less opposing it, is not anti-semitic. Can I sue now?