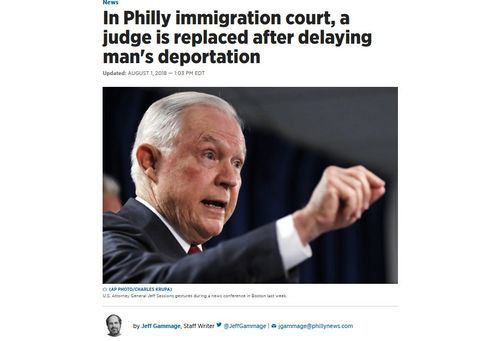 Jeff Sessions never ceases to amaze.  Either foolishness (as with his attitude towards Rod Rosenstein) or winning bigly, we never know what side he will fall down on.  He has been in a long battle against the #Resistance in the Department of Justice’s immigration bureaucracy, the Executive Office for Immigration Review (EOIR).  And it appears there has been a small victory over recalcitrant kritarchs in the EOIR.  An insolent and insubordinate Immigration Judge attempted to sabotage the deportation of an illegal alien, but was slapped down ignominiously.

The Justice Department replaced a Philadelphia immigration judge who had asked for more legal information in a deportation case, inserting a new jurist who quickly ordered the defendant removed from the United States, according to a letter of protest signed by 15 retired judges.

The ouster of Judge Steven Morley from the case marks the latest attack on judicial independence by a Justice Department led by Attorney General Jeff Sessions, the judges wrote.

“As a democracy, we expect our judges to reach results based on what is just,” they stated, “even where such results are not aligned with the desired outcomes of politicians.”

The big error is that Immigration Judges are not real judges, they are employees in the Department of Justice, and consequently have no independence.  And as far as the desires of politicians goes, the President is the controlling legal authority for the Department of Justice, and Immigration Judges.  All they have to do is read the Constitution, which clearly states the following in Article II, Section 1: The executive Power shall be vested in a President of the United States of America.

The well-paid Kritarch Morley apparently does not like being supervised.  He has illusions of grandeur, thinking he is a an Article III judge, not beholding to supervision and that he can impose his own immigration policy as a minor functionary in the DOJ and directly challenge the Attorney General and the President.

Morley was presiding over the case of Reynaldo Castro-Tum, who came here four years ago from Guatemala as an unaccompanied 17-year-old.

He had been released into the care of a relative in rural Washington, Pa., and had failed to show up at several court hearings. The judge suspended the case using a procedure known as “administrative closure,” saying the notice sent to Castro-Tum may have gone to the wrong address.

As head of the Justice Department, which oversees immigration court, Sessions has restricted the use of administrative closure, a common practice in the past.

Morley was removed after he asked for briefs to be filed on whether the defendant had been properly notified of the hearing. The Justice Department’s Executive Office for Immigration Review sent Assistant Chief Immigration Judge Deepali Nadkarni to Philadelphia Immigration Court to conduct a single hearing. She ordered the defendant removed without further inquiry.

Now, we don’t know what has happened to Morley  (fired, disciplined, whatever.) What we do know he is a softy on fake asylum claims similar to that of the now deported “child” Castro-Tum, who came here during the Obama Child Surge from Guatemala.  He was a practicing immigration attorney at his appointment by the anti-white racist Eric Holder.  Given Castro-Tum’s multiple failures to appear, he is undoubtedly a gang member, something not a concern to Treason Bar veterans like Morley.

And the union for these #Resistance saboteurs in the EOIR is livid, they think they are real judges and don’t like supervision.  Not surprisingly, their union representative is the Iranian national Ashley Tabaddor, well known to VDare readers.  [Iranian-American Immigration Judge Ashley Tabaddor In Hot Water--Ordered To Recuse Herself On Iranian Cases, Files “Civil Rights” Beef, by Federale, VDare, August 17, 2014]

Ashley Tabaddor, an immigration judge who heads the judges’ union, the National Association of Immigration Judges, said her organization was “deeply concerned” about the incident and that they were exploring “all available legal actions…”

Tensions have increased in recent months between the union and Sessions, who has warned that immigration judges, who are Justice Department employees, will be evaluated on the basis of how many cases they’ve heard. His referring cases to himself to establish policy also has rankled the immigration judges’ union.

[Retired Immigration Judges Are Protesting How A Deportation Case Was Handled, by Hamed Aleaziz, BuzzFeed, July 31, 2018]

Such insubordination by Morley, Tabaddor, and Morris Onyewuchi are the reason why the EOIR and the rest of the Federal swamp needs to be drained.  Termination is the proper action for persons serving as attorneys for failing to follow the law, instructions from their superiors, and an ethical failing.  Examples should be made of these resistance activists encouraged by the #LyingPress to violate the law.  Put them down before others are emboldened.  Time for President Trump to use his signature line, “You're fired!”