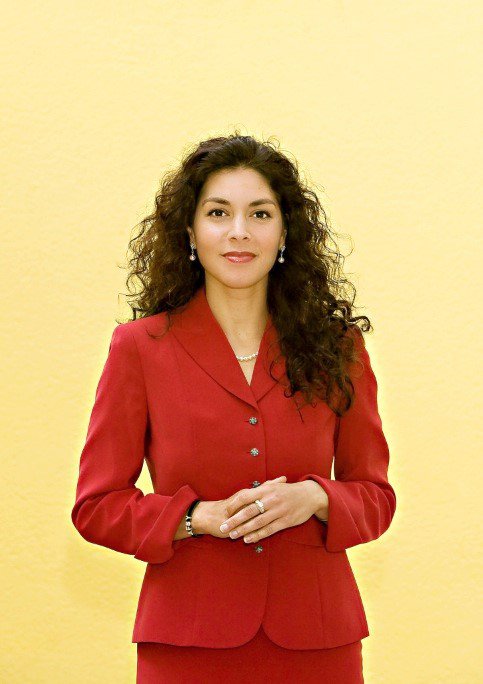 A. Ashley Tabaddor, one of the kritarch triumvirate I exposed in Obama’s Immigration “Judges” Plan Their Own Administrative Amnesty, has pushed the limits of legal ethics, even for the Holder Justice Department. Tabaddor has been ordered by the Executive Officer for Immigration Review (EOIR) to recuse herself in all cases before her involving Iranian nationals.

This is no surprise, as "ethnic" immigration judges have a collective horrible reputation for dispensing favoritism to their co-ethnics throughout the immigration system.

August 12, 2014, Los Angeles, CA – The Public Affairs Alliance of Iranian Americans (PAAIA) was today informed of a suit filed against the United States Department of Justice (DOJ) by Judge Ashley Tabaddor, an immigration judge for the U.S. Immigration Court. In this suit, Judge Tabaddor challenges an order that indefinitely recuses her from hearing cases involving Iranian nationals, citing that the order violates her First Amendment rights of free speech and association. The suit also notes that the order is racially discriminatory under Title VII of the Civil Rights Act of 1964.

Interesting that Tabaddor claims racial discrimination as the basis for her lawsuit; is she claiming she is white and was discriminated against, or is she some new unknown race that Middle Easterners like herself want to be? She has shrilly claimed to not be white, despite the legal definition of Persians, among others, as white by the U.S. Census. [Race Matters: Are Middle Easterners Really White? by Afsaneh Ashley Tabaddor, Levantine Cultural Center, February 20, 2010].

The PAAIA appears to be a front for the Shi'ite dictatorship in Iran, harping in a Soviet manner about "friendship" between nations.

The lessons derived from the Cold War propose that more assets should be dedicated to cultural and educational exchanges. Such exchanges with Iran will uphold positive features of American society and help cultivate the good will of the Iranian people towards America.

However, the PAAIA lets slip that Tabaddor considers herself a "leader" in the Iranian community.

The suit, Tabaddor v. Holder et al., [PDF] charges that the DOJ based its disqualification order on racially-motivated and discriminatory criteria, specifically Judge Tabaddor’s Iranian heritage and her leadership role within the Iranian American community.

Well, if she is a leader of an ethnic or national group, then legal ethics prescribe that she recuse herself to avoid the appearance of impropriety, a serious ethical issue for both real judges and the pseudo-judges of the EOIR. One cannot both be a leader in a particular ethnic community and claim that leadership has no appearance of a lack of impartiality. It is clear that Tabaddor considers herself an Iranian first, as Iranian-ness appears to be her major concern in public life.

In desperation, Tabaddor and her Iranian attorney, Ali M. M. Mojdehi, created a new race for the law suit:

Even more interesting is that she is "culturally" a Muslim. The 1964 Civil Rights Act does not protect cultures, as it does race or religion. And it is clear that Islam is not that important for Tabaddor, as she does not claim to practice the Muslim religion. This lack of religious practice is probably the reason that the lawsuit does not identify any particular evidence that she was discriminated against by race or religion, even though the lawsuit claims discrimination based on three factors:

52. Judge Tabaddor’s nationality, race, and/or religion and association with the same, were the sole and/or motivating reasons for the recusal order.

Note the "and/or." apparently her crackerjack attorneys can't decide which of the three was the reason for the alleged recusal order. Occam's Razor then leads us to the obvious, it is the appearance of a lack of impartiality that motivated the recusal order.

The solution, beside denaturalization and deportation of Tabaddor, is the first step, impeachment.

Tabaddor is the face of dual loyalty. As Holy Scripture teaches, one cannot serve two masters. From Matthew 6:24, Douay-Rheims:

Tabaddor cannot both serve the Iranian community as a leader and the American people as an immigration judge who is tasked with ordering the deportation of Iranians.

The big hint here is that the PAAIA refers to her as Judge Ashley Tabaddor, while in the lawsuit, she is required by law to user her full name, Afsaneh Ashley Tabaddor. Clearly she is trying to downplay her Persian identity before the American people, but gets caught up by her lawsuit.

Impeachment is the answer to many problems derived from lawless Presidents to disloyal kritarchs.