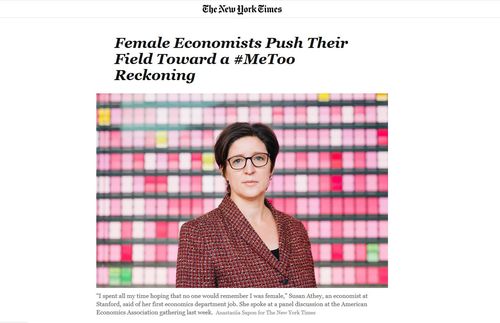 Is Economics More Successful Than Sociology Because It's More Masculine and Less Politically Correct?

The field of economics has been perhaps the biggest success story in the social sciences over the last half century or so. While cultural anthropologists used to be celebrities, they’ve largely vanished from public consideration. Sociologists were once respected experts (e.g., when I was at Rice U. in the late 1970s, the most prominent professor, Bill Martin, was a sociologist; IIRC, he was even profiled by Sixty Minutes), but are now more often used as punchlines.

Economists, however, have done very well for themselves in terms of pay and publicity. For example, they got their fake Nobel Prize in the late 1960s and it’s largely treated as a real Nobel today.

Not surprisingly, economics is more of a Guy Subject. Fom the New York Times:

Female Economists Push Their Field Toward a #MeToo Reckoning“
By Ben Casselman and Jim Tankersley, Jan. 10, 2019

ATLANTA — The economics profession is facing a mounting crisis of sexual harassment, discrimination and bullying that women in the field say has pushed many of them to the sidelines — or out of the field entirely.

Those issues took center stage at the American Economic Association’s annual meeting, the largest gathering of the profession, last weekend in Atlanta. Spurred by substantiated allegations of harassment against one of the most prominent young economists in the country, top women in the field shared stories of their own struggles with discrimination. Graduate students and junior professors demanded immediate steps by the A.E.A. to help victims of harassment and discipline economists who violate the group’s newly adopted code of conduct.

Leading male economists offered an unprecedented acknowledgment of harassment and discrimination in the field. “Economics certainly has a problem,” Ben Bernanke, the former Federal Reserve chairman, who took over as A.E.A. president this year, said during a panel discussion. The profession has, “unfortunately, a reputation for hostility toward women and minorities,” he said. …

Economics has long struggled with diversity. Only about a third of economics doctorates go to women, and the gender gap is wider at senior levels of the profession. Racial and ethnic minorities — particularly African-Americans and Latinos — are even more underrepresented. And notably, the gender gap in economics is wider than in other social sciences and, at least by some measures, traditionally male-dominated fields such as science and math.

Certain subfields, like finance, have a particularly poor record of advancing women.

I would imagine that finance economics is very close to being the most lucrative field in all of academia. So it tends to attract the most hard-charging, money-minded academics, who tend to be … men.

Stories of harassment and discrimination, long shared in private conversations and email chains, began to be aired more publicly last year with allegations that Roland G. Fryer, a prominent Harvard economist, had harassed and bullied women in his university-affiliated research lab.

Yet another high-achieving black man comes acropper of MeToo. Somebody should study whether MeToo disparately discriminates against black men.

Many male economists long dismissed claims of bias and discrimination, arguing that gender disparities must reflect differences in preference or ability. They pointed to theories that predict that, in the simplified world of economic models, discrimination on the basis of characteristics like gender and race would disappear because of competition.

In recent years, however, a growing body of research has found evidence of discrimination at virtually every stage of the profession, from undergraduate enrollment to tenure decisions. Erin Hengel, a University of Liverpool economist, has found that women are held to higher standards of writing and research than their male colleagues. Alice Wu, then an undergraduate at the University of California, Berkeley, made waves two years ago with a paper documenting rampant misogyny and hostility toward women on a popular online forum for graduate students.

Wow, “hostility” on a forum for unemployed young high IQ men? Who could have predicted that?

One provocatively titled paper presented in Atlanta asked “Does Economics Make You Sexist?” It found that undergraduate students in Chile exhibited more implicit and explicit gender bias after studying economics. The effect was particularly strong among male students — and weaker in departments with more female faculty members.

My guess is that economics being more masculine, less politically correct, more mathematical, and more prestigious than other social sciences are all interrelated.

Turn econ into yet another pink collar ghetto like so much of academia, and the hard chargers will migrate to some other adjacent field, such as can be found in Business Schools.