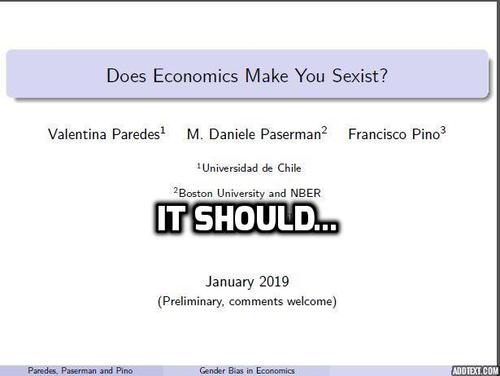 “Does Economics Make You Sexist?” Yes, Economists Know "78 Cents On The Dollar" Means Women Only Work 78 Percent As Hard

Below, Steve Sailer links to an NYT story that says

One provocatively titled paper presented in Atlanta asked “Does Economics Make You Sexist?” It found that undergraduate students in Chile exhibited more implicit and explicit gender bias after studying economics. The effect was particularly strong among male students — and weaker in departments with more female faculty members.

Shelly Lundberg, a University of California, Santa Barbara, economist who has long pushed the field to include more women, said that each study had faced “an unusual level of scrutiny and skepticism,” but that taken together, they were hard to dismiss.

“The realization that this is real, that there is bias, is starting to sink in,” Ms. Lundberg said. “I really think this may have been the breakthrough.”

Economics should make you "sexist", because once you  study it, you'll realize that when women are found to be earning only 78 percent of what men do, it means they're working 78 per cent as hard (because of different priorities) or only 78 percent as well.

If women can do a job as well as men, but for cheaper wages, they will replace men in that job. (In the nineteenth century, secretaries were male.) Economists, faced with the ideas that employers are paying women less than men for the same work, will ask "Then why don't they replace all their male employees?" Remember, employers frequently replace American workers with foreign workers, just because they're cheaper.

So yes, economics should make you sexist. Next question: does economics make you racist, too?