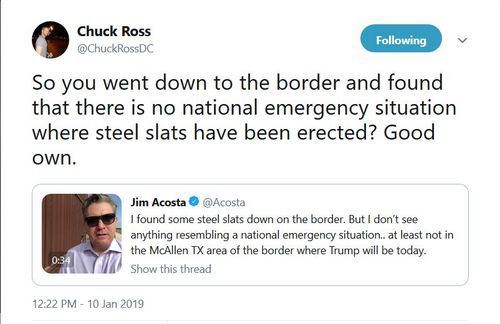 [T]he country was an armed camp. Soviet-bloc military equipment was everywhere, from the AK-47 rifles to the Russian jeeps and trucks to the MI-24 helicopters, huge flying tanks. I was amazed at the sheer volume of it all and even further amazed by the reaction of the fellow Americans I met in Nicaragua. Even the journalists would proclaim, sitting in a restaurant in the midst of all this armament, that the Sandinistas were not communists and were in fact nonaligned. The willful ignorance astounded me. It was as if they were sitting in the officers club at Fort Dix and declaring that the United States was nonaligned.

What brought this to mind is “Hispanic”(he has a Cuban father) journalist Jim Acosta’s going to McAllen, Texas, and failing to find a border crisis.

So you went down to the border and found that there is no national emergency situation where steel slats have been erected? Good own. https://t.co/hykUVEYsfb

The thing is, not seeing a border crisis in McAllen is like not seeing Communists in Nicaragua. McCallen is so Hispanicised, it might as well be under Mexican occupation.

I remember when we published Meet The New Boss, DIFFERENT From The Old Boss—Caciquismo Comes To McAllen, Texas By Henry McCulloch in 2007, but for more recent items see: 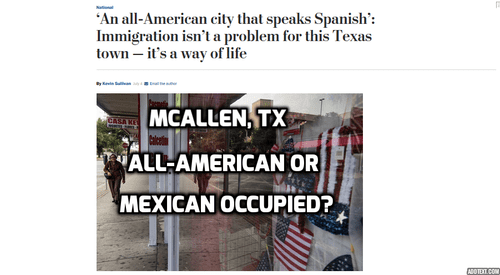 That last one had Steve linking to a happy-clappy story by the Washington Post titled An all-American city that speaks Spanish’: Immigration isn’t a problem for this Texas town — it’s a way of life, by Kevin Sullivan, July 4, 2018.

In response, Steve pointed out:

[I]n reality, we actually have long-existing examples of our upcoming Brave New America. It’s just that nobody pays attention to them because they are boring and depressing.