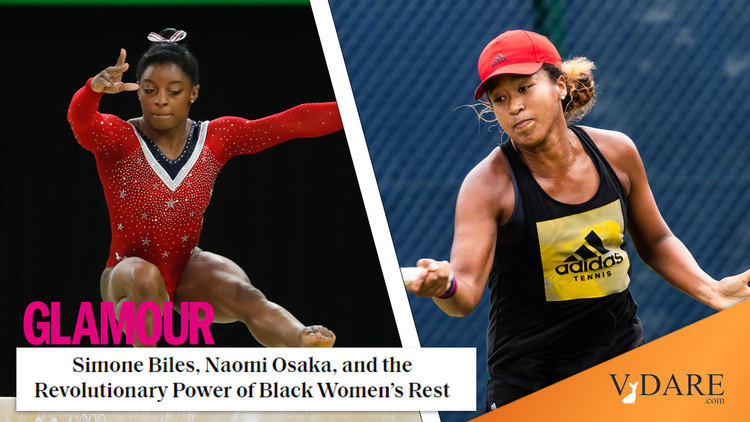 A growing theme in the media is the Racial Right to Laziness.

This appears to be a different op-ed by a different black woman than “Simone Biles, Naomi Osaka, and the Revolutionary Power of Black Women’s Rest” in Glamour that I cited  three weeks ago, but this one from the Washington Post opinion page today sure sounds familiar. But that’s the point, isn’t it? Black women are too exhausted to come up with new ideas:

Inspired by Simone Biles and Naomi Osaka, many of the Black women I know in the business world say they are taking steps this year to reclaim their rest

Amanda Miller Littlejohn is a writer and executive branding coach.

The previous one about Simone Biles and Naomi Osaka being exhausted was by “Melissa Kimble is a Memphis-based cultural writer and strategist, writing and building at the intersection of culture, community, and wellness,” who sounds a lot like Amanda Miller Littlejohn. But that’s why we need more Diversity: so we have access to all the amazing diversity of thought among black female strategists and executive branding coaches.

… Then Naomi Osaka pulled out of the French Open, citing her mental health. Several weeks later, Simone Biles withdrew from Olympic competition. Unlike me, both Black women chose to put their own health and well-being above the demands of their professions.

It struck a chord with me and many of the Black women I know.

In my business as an executive branding coach, I work with professional Black women who, while not competing on international athletic stages, are all accustomed to the rigors of competitive work. This year my current and former clients have all said in one way or another that they’re tapped out. They’ve started to intentionally reclaim their rest.

One such woman is Amber Cabral, who runs a boutique diversity and inclusion firm based in Atlanta and who I am currently coaching. Last May after George Floyd’s murder, the demand for her training services grew so much she was often working 12-to-14-hour days, sometimes at odd hours to accommodate her clients in different time zones.

Cabral was already on the brink of burnout when her godmother died suddenly in June. After the funeral, she booked a flight to Anguilla and took a week off to grieve. …

“Black women have been groomed to overachieve,” she said. “We know how to boss up and get it done. So it’s about reprogramming the idea that it’s weak to say you can’t do more.”

Reba Peoples, a psychiatrist and founder of Imara Health and Wellness center in Atlanta who specializes in helping women do this kind of reprogramming, says the inability to rest is equal parts history and science. Peoples was a coaching client earlier this year.

“We live in a culture that values productivity, so we’re measured by that capacity to produce,” Peoples said. “But for Black people, that idea goes even deeper because our [enslaved] ancestors were literally valued based on their capacity to produce labor. Not working up to capacity could mean beatings, or you could be sold off and separated from your family. So it was dangerous to rest, and we’ve had that encoded into our DNA.”

Last year, Kimberly Boyd Lewis, an executive coach in the D.C. area whom I worked with in 2017, saw how dangerous it was to rest when she lost two close friends and her aunt in close succession. Then her father-in-law had a car accident that left his back broken in four places.

Grieving and exhausted, she shared her need to take a step back at work. She says her boss, a White woman, explicitly told her she needed to push through anyway.

“I was exhausted, but expectations for me in my role were very different as a Black woman,” she said. “And I had [other] White female colleagues tell me that.”

She left the job a few months later.

According to Reisha Moxley, a Nashville-based clinical psychologist who did her doctoral research on high-achieving Black women working in predominantly White spaces, such microaggressions are common, and offer another explanation for why Black women are clamoring for rest. (I’ve hired Moxley as a consultant).

Until this year, former client and D.C.-based corporate executive Quiana Smith believed that outworking others was the key to her success. Once the pandemic took hold, she found herself working 12-hour days on her firm’s busy government practice. The schedule was a lot, even for her. She took off work in July, intending to take a trip.

“I did not realize how exhausted I was until I actually stopped and I didn’t do anything,” she said. …

That’s what happened when Christin “Cici” Battle left her job last year as executive director of a national nonprofit. (I coached Battle in 2015). She went home to Florida intending to stay for only two weeks. Two weeks turned into six months.

“I didn’t have any distractions,” Battle said. “And I realized there were so many things I was doing at the expense of my wholeness.” …

“And oftentimes as a Black woman, the only time that I’m applauded is when I’m outworking someone. And usually that is at the expense of me.”

Battle now consults as a social impact strategist, community builder and what she calls “frolic facilitator,” helping others find joy and value apart from their labor.

She says Simone Biles and Naomi Osaka’s actions resonated so deeply for Black women because they signaled to the rest of us that saying no and prioritizing ourselves is okay.

… Personally, I’ve learned that rest is something I must fight for. I took a six-week sabbatical to write and rest that kicked off on my 40th birthday last month. I may not be risking a gold medal, but turning on my autoresponder and turning down paid work in favor of rest feels revolutionary to me. And I’m not the only one.

But, but, I thought there was all this untapped black female talent out there ready to be promoted into the really important jobs. Now, it turns out that black women who can handle white collar jobs are already absolutely exhausted and need to work less.

Clarification: An earlier version of this story should have specified the author’s relationships with the people she cites. The story has been amended to clarify those relationships.