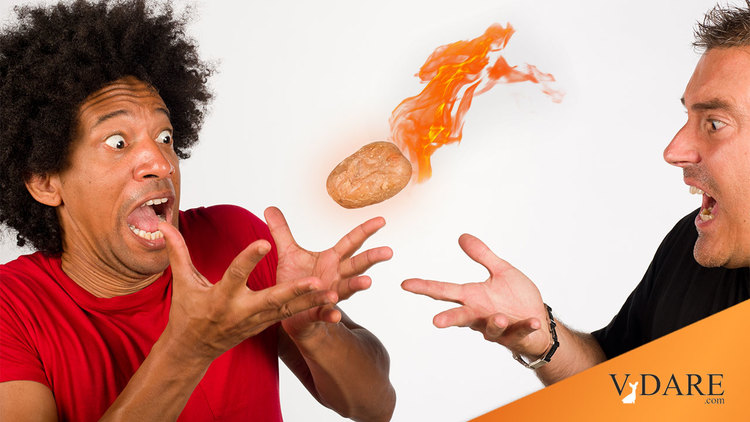 Chocolate Chip Cities: How Liberal Northern Cities Are Dumping Their Hot Potatoes Off On The South

The term “inner city” has long been used as a derisive euphemism for Black — poor, blighted and in distress. But many inner cities in the North and West are becoming less and less Black because Black people are moving out….

In 2018, a church elder, Jeanne D. Cooper, told The Washington Post that the District of Columbia used to be called “Chocolate City.” She continued, “Now it’s Chocolate Chip City.”

According to the most recent census data, the Black population of D.C. fell to 41 percent in 2020.

The dwindling of the Black population in what had come to be Black strongholds is happening all over the country, either because of pricing pressure for housing spurred by gentrification or the reverse migration wave of Black people from the North and West moving back to the South. …

And/or immigration, but let’s never ever mention immigration in a not wholly enthusiastic context.

The Black share of the population of Oakland, Calif., the birthplace of the Black Panthers, has fallen from 44 percent in 1990 to just 20 percent in 2020, a drop of over half in just 30 years.

… In the 2020 census, the Black population of Harlem fell even further and now accounts for just 37 percent of the total.

Chicago, a major destination for Black people during the Great Migration, has seen its Black population decimated. As NPR reported last year: “In 1980, decades of Black population growth in Chicago stopped and reversed. By 2016, Chicago’s Black population had decreased by 350,000 from its peak level of nearly 1.2 million in 1980.”

In 2010, Black people were the largest racial group in Philadelphia. That is no longer true. Now white people are.

Even before this census, The Los Angeles Times was reporting on a Black exodus from Western cities like Los Angeles, San Francisco, Seattle and Portland, Ore., writing, “West Coast progressive enclaves are either seeing an exodus of Blacks or are failing to attract them.”...

These shifts don’t mean that there are now fewer cities with Black majorities; the number is on the rise, as Brookings pointed out in 2019. It’s just that 90 percent of majority Black cities are now in the South.

My metaphor for blacks and cities isn’t a cookie, it’s a hot potato. Blacks tend to be America’s hot potato, and liberal northern cities are increasingly adept at dumping their hot potatoes off on the south.