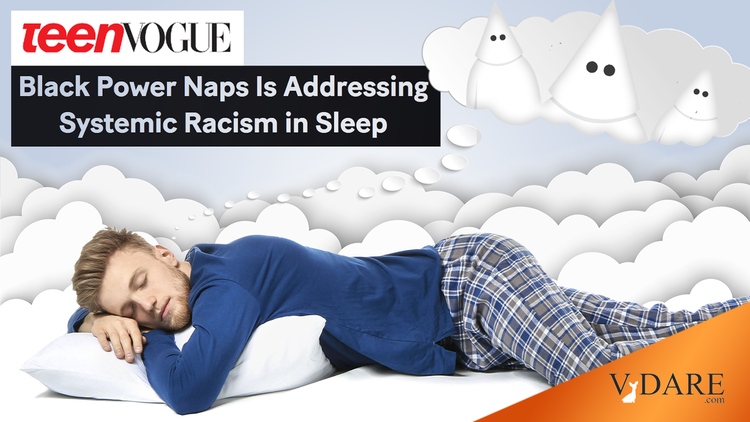 When CNN got writer Blake Neff of their archrival, the Tucker Carlson show, cancelled, the third comment by Neff they highlighted was:

“Honestly given how tired black people always claim to be, maybe the real crisis is their lack of sleep.”

Not from the Babylon Bee but from Teen Vogue:

Dream Diary is a series exploring dreams, nightmares, and what happens when they bleed into real life. Here, the creators of Black Power Naps talk about rest as reparations, and the need for sleep to realize your dreams.

Fannie Sosa and Navild Acosta were tired, but it wasn’t just any old fatigue. Yes, they experienced a lack of sleep, but they were specifically experiencing a generational fatigue familiar to Black people and people of color. From this sleeplessness, the two created Black Power Naps.

“It came from understanding that the American dream is a sleepless one,” Sosa said. “ We inherited this exhaustion.”

Black Power Naps is an artistic initiative with components including physical installations, zines, an opera, and more. But it’s also a recognition of the hundreds of years of sleep deprivation that Black people and people of color have experienced as a result of systemic racism, a way to pushback against the false stereotype that Black people are lazy, and an investigation of the inequitable distribution of rest. That lack of sleep has serious consequences. …

Studies have shown that, for a host of reasons, Black people get less sleep, and less deep sleep, than white people. Sleep loss can cause higher levels of cortisol, as Acosta noted, and can lead to many health problems including early death. But there's something deeper going on — Acosta explained that sleep deprivation was used as a means of control over enslaved people, meaning Black people haven't been getting the sleep they need for generations.

Also redlining restricted blacks to noisier neighborhoods, so Readers of Color of Teen Vogue inherited their lack of sleep from their great-grandmothers.

“We’re dealing with an inheritance of sleep deprivation. Sleep deprivation was a…deliberate tactic of slave owners to basically make the mind feeble,” he said. “That same tactic has only evolved.”

To help resolve this chronic lack of sleep, Acosta and Sosa are calling for rest as reparations. Yes, they're looking for an ease to the many burdens that might prevent Black people and people of color from sleeping like systemic racism, socioeconomic struggle, and more. But they're also looking for the opportunity to rest and have leisure time — time that will allow people to dream and heal.

“The dream space is a crucial space to make sense of your reality and properly process the violence that may be happening,” he said. “When we’re not getting the sleep we need, it is another front line — the place where we sleep.”

This conversation about rest is particularly pertinent now, as people take to the streets to say Black Lives Matter. If Black people keep having to fight for their humanity, how can they ever rest knowing they could be in danger?

“We are having to go out in the streets during a pandemic, expending our energy in really huge amounts in order to ask for reparations and rest and energy. It is a … double edged sword to navigate as an activist or organizer,” Sosa said. “You are putting your body on the line to reclaim it. That creates a lot of burnout. We have people who are 20, 21, they are burnt out. They need time off. They need not only to sleep, but to know their people are going to be ok, to know they’re going to be ok, to know they can take a break.”

While the pandemic has halted the physical representation of Black Power Naps, Sosa and Acosta said they’re rethinking what the initiative looks like during the pandemic. They have plenty of dreams (which they said they’re in search of funding for), but they’re also using this time to dream — just like we should all be allowed to.

Perhaps Mr. Neff can get a job writing for Teen Vogue?