Calling the far left Communists is something that should be done more often: 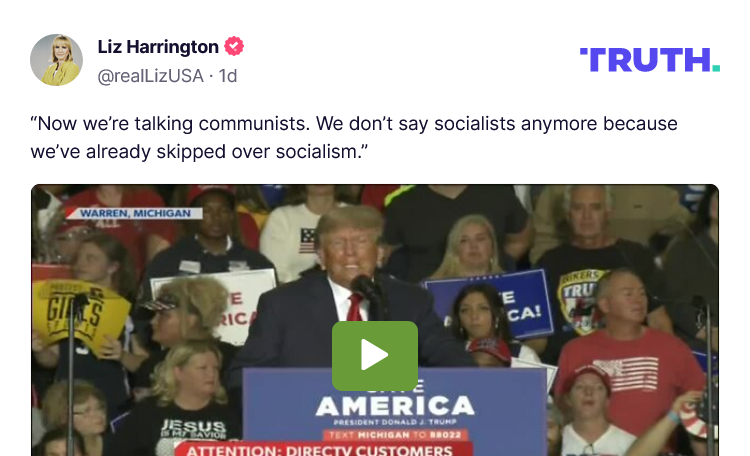 Trump: ”If the Communists win—and now we’re talking Communist, we don’t say socialist anymore, because we’ve already skipped over socialist—but I’m afraid we have never had, and I don’t believe we’ll ever have a fair election again.”

Well, of course, if we don’t have fair elections, no one will know, because it will be illegal to say so.

But one thing about his speech, along with his criticism of Biden’s Border Disaster, is his mention of shutting down some kinds of legal immigration:

We will shut down Biden’s border disaster, reinstitute our strong remain in Mexico policy. How’s that policy? They think that was easy. And then they gave it up on day one:  remain in Mexico. No, let’s let them come into our country unchecked. Terrible,  just terrible. The thought process is so sick. We will strengthen the patriots of ICE and the Border Patrol. We will again end Catch And Release. We will end Chain Migration, we will end the Visa Lottery. We will clamp down on illegal immigration just like we did less than two years ago. Think of it—the safest border in our history. Two years ago we had the safest border in our history. And nobody even disputes it not even the fake news back there.

Obviously, Biden’s Border Treason was predictable—Biden himself predicted it.  But the GOP refused to run against it.

Washington Watcher II wrote before the Georgia elections that cost the GOP  the Senate that  Karl Rove Is Back! And Just Might Lose Georgia For GOP If Senate Candidates Don’t Campaign Against Biden’s Threatened Amnesty and after that election, VDARE.com editor Peter Brimelow wrote  ”This Is McConnell’s Disaster And He Needs To Resign Immediately”

But more important,  what’s likely to win for whoever runs for President in 2024 is a promise to do something about legal immigration. That’s what worked in the 2016 election—see Trump Posts Immigration Plan, Neocons Go A Little Crazy, August 16, 2015.