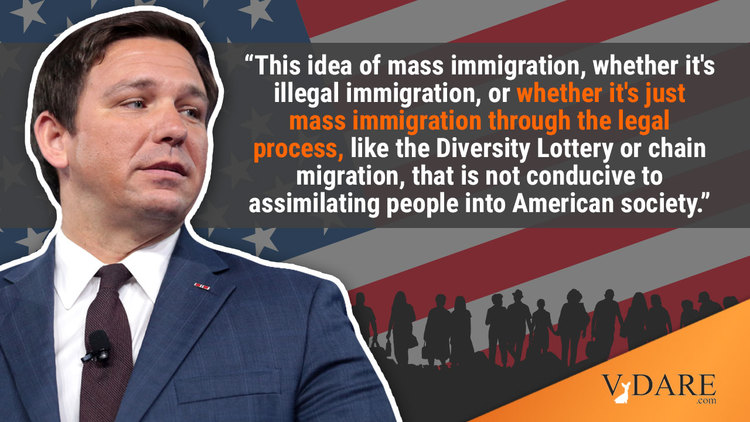 Ron DeSantis spoke at the National Conservative Conference on September 11/12 and he addressed the levels of LEGAL immigration in his speech, which is what Trump did before he got elected (see Trump Posts Immigration Plan, Neocons Go A Little Crazy, August 16, 2015). I’ve made an electronic transcript of the speech, and highlighted some of the pertinent parts. Note that when he’s talking about buses, it’s before the Siege of Martha’s Vineyard.

The United States is a nation that has an economy, not the other way around. And our economy should be geared towards helping our own people. And so you see what’s been done over the last generation, the late 90s, they said, We need to give China most favored nation trade status, put them into the World Trade Organization that has not worked out the way they said it would, it is empowered, it’s made some people in the United States rich, it’s made a lot of people probably a lot worse off, it’s certainly made China much more powerful and much more dominant to the extent where we’re dependent on them for key things involving our own economy. So that’s not the best for economics, it’s certainly not the best in terms of geopolitics. And it’s not the best in terms of when we have security issues that we have to do, like in COVID, almost everything we needed was in China.….

And we’ll see what happens in November. But I feel good that the Republicans are going to take the majorities in the Congress. And if they do use the power that you have, you’ve got to hold Biden accountable on the border. I’m sick of the press releases, I’m sick of the interviews,  actually take some action. In Florida, we’ve taken action, we’re not a border state, people will say, but all this affects everybody. So since I’ve been governor, we have banned Sanctuary Cities in the state of Florida, we’ve made sure to sue the Biden administration on his catch and release policies. And we’re actually in a good spot in that case. And I got $12 million in the most recent budget that we got available now this summer, so that if Biden is busing illegal aliens into Florida, I’m going to reroute the buses to Delaware and other states.

That’s part of the reason we wanted to do our program. Because these are intentional policies, and the people that support those policies should live with the consequences of those policies.

And here’s the thing, when you look at what’s happened at the border, we focus on the criminal aliens, drugs, all that’s very important, but just the sheer number of people overwhelms communities. And this idea of mass immigration, whether it’s illegal immigration, or whether it’s just mass immigration through the legal process, like the Diversity Lottery or chain migration, that is not conducive to assimilating people into American society.

So the national interests of our country, and we’ve had a variety of different immigration policies throughout our country’s history, we’ve had periods where we had high immigration levels that we had success, but we’ve also had periods where we had great success with immigration levels being very low, such as the years, decades after World War Two. So the issue is, is how does immigration serve the people of the United States and the national interests? We’re not globalists who believe that foreigners have a right to come into our country whenever they want to. It’s what we think is the right thing to do.

Watch the whole thing below: