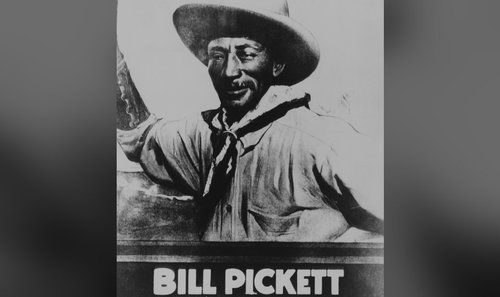 Steve Sailer's recent Google survey turned up a Google list of American cowboys with two black cowboys at the start of the list. (See here and here). The very first cowboy to appear on the list was Bill Pickett, an African-American cowboy who was also part Cherokee.

Whatever one thinks of Google, an objective look at Bill Pickett's career shows that he was a great cowboy. In fact, Pickett  deserves to be on the list more than some others, who are not even on the list for being cowboys, but for being outlaws!

Bill Pickett, born in Texas, actually invented the technique known as "bulldogging", or "steer wrestling", which is, as described by Wikipedia,
"...a rodeo event in which a horse-mounted rider chases a steer, drops from the horse to the steer, then wrestles the steer to the ground by grabbing its horns and pulling it off-balance so that it falls to the ground."

A Wild West Show was a spectacular form of American entertainment of the late 1800s and early 1900s,  which no longer exists.

The Wild West shows were enormous open-air performances, lasting 3-4 hours,  that might involve over 1000 performers, who traveled by train from venue to venue in the U.S. and Europe.  There were male and female performers, including Indians and Mexicans. There was much horse riding, roping, racing, marksmanship competition.  There were wild animals including bison, bears and moose.  There were staged hunts and Indian battles.  They were spectacular performances of a genre that no longer exists.

The most famous such show was that of Buffalo Bill and there were  two famous shows based in Oklahoma, the Miller Brothers' 101 Ranch Wild West Show and Pawnee Bill's Historic Wild West Show.

As for Bill Pickett, he was a cowboy to the end. As reported in the Bill Pickett Wikipedia article  "In 1932, after having retired from Wild West shows, Bill Pickett was kicked in the head by a bronco and died after a multi-day coma."  Pickett was buried next to his former employers the Miller Brothers in the Cowboy Hill cemetery, "on a bluff overlooking the Salt Fork of the Arkansas river in Kay County, Oklahoma" (Cowboy Hill article).

So yes, Bill Pickett deserves to be on any list of great American cowboys.  Let's don't let today's  Affirmative Action mentality prevent us from honoring the memories of African-Americans who really deserve credit for accomplishing great American accomplishments.