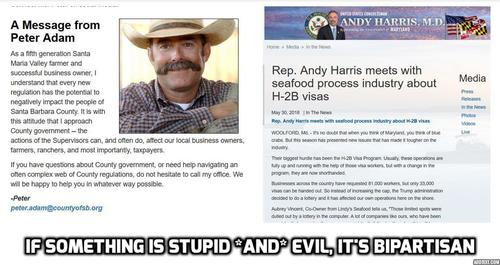 GOP And Dems Share Blame For Romaine Scandal. A Pox Or E. Coli On Both Their Houses

Earlier: How Much Does Romaine Cost? Plenty, If You Live in California

The Food and Drug Administration reports that 59 people became ill and 23 were hospitalized including 2 with kidney failure. E. Coli is serious.

The consumers in the U.S. are not the only people affected. Six Canadian provinces also received tainted lettuce and the recall of the romaine caused considerable problems.

So far, the only specific grower identified with contaminated romaine is Adam Brothers Family Farms. A photo of the Adam brothers farmers is below. The "brother" on the left is Peter Adam.

In his statement on the Santa Barbara County website, he states in part,

"I understand that every new regulation has the potential to negatively impact the people of Santa Barbara County."

The photo of Supervisor Adam is from the Santa Barbara County website.

He has a hat and a mustache. I do not know if he has a horse, but he does have lots of farmworkers to harvest his crops, including the contaminated romaine. According to his biography on the County website, Peter Adam oversees the 400 employees who work on the family farm.

Are his laborers legal guestworkers? Does he use E-Verify? Who knows? What we do know is that the majority of farmworkers in the Santa Maria Valley are Mexicans because their children attend the Santa Maria-Bonita School District where 80 percent of the students speak Spanish or Mixteco.

We also know that Supervisor Adam does not like regulations which negatively impact people in Santa Barbara County. How does Republican Adam feel about regulations which protect Americans and Canadians from E. Coli? Or laws against hiring "cheap" workers who live illegally in the United States?

Nationally, the Democrats are blocking the passage of E-Verify and money to build a wall, among other things.  But, many Republicans continue to hire immigrant "cheap" labor and press for ever more non-immigrant visas.

For example, Representative Andrew Harris of the Eastern Shore of Maryland voted in 2017 to quadruple the number of H-2B workers. These are visas for unskilled, non-agricultural workers. Overall, Rep. Harris has an A- grade on NumbersUSA. Why then does he support this huge increase in H-2B visas?

The employers in the blue crab business on the Eastern Shore say they cannot get American workers who are willing to pick crab meat out of the shells. I grew up in Maryland. Black Americans used to pick crabs for markets and restaurants. They also shucked oysters. My parents bought steamed crabs which we picked ourselves on Sunday afternoons. We had sweet corn from the Eastern Shore too. It's a fun memory.

Apparently, Americans do not like to pick crab meat any more.  As the blue crab population is dwindling, perhaps it would be better to let the crabs just go forth and multiply. Rep. Harris, a Republican, thinks we need more unskilled, immigrant visas so that the blue crab business can use cheap labor. I say let them eat shrimp.

The bottom line is that both Democrats and Republicans are contributing to our immigration explosion. A pox or E. Coli on both their houses.