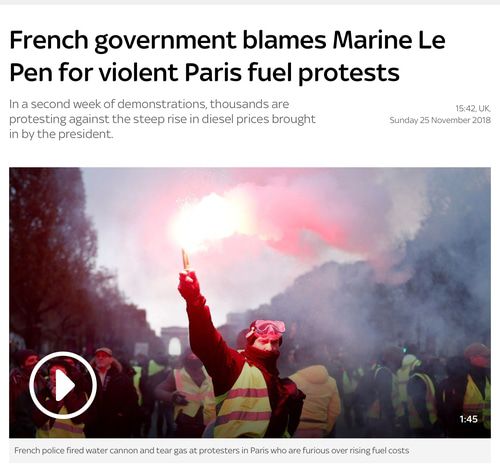 Violence continues in Paris as a tax protest has spiraled out of control. The anti-French, pro-globalist government of Emmanuel Macron has lost the streets and there are loud calls for the president's resignation.

Rioters ran amok across central Paris on Saturday, torching cars and buildings, looting shops, smashing windows and clashing with police in the worst unrest in more than a decade, posing a dire challenge to Emmanuel Macron's presidency.

The authorities were caught off guard by the escalation in violence after two weeks of nationwide protests against fuel taxes and living costs, known as the "yellow vest" movement after fluorescent jackets kept in all vehicles in France.

In Paris, police said they had arrested almost 300 people while 110 were injured, including 20 members of the security forces. Police fired stun grenades, tear gas and water cannon at protesters at the top of the Champs-Elysees boulevard, at the Tuilleries Garden near the Louvre museum and other sites.

In some areas there was virtually no police presence at all, as groups of masked men roamed in the shadows of the capital's fabled landmarks and through its fanciest shopping districts, smashing the windows of designer boutiques.

The protests are overwhelmingly popular and aren't really linked to a single political grouping [France is shaken by protests no one saw coming, by Agnes Poirer, New York Times, November 28, 2018] Both the "extreme" Left and Right are in the streets. The leftist angle is that protesters are angry at Macron for favoring the rich and big business; the rightist angle is that this is a tax revolt sparked by the fact that the new fuel costs will mostly be imposed on the countryside (where people who have to drive live) instead of Paris.

As globalist neoliberalism continues to lose support among the masses, the boogeyman of "fascism" is increasingly used to keep people in line. Twice in France, once against Jean Marie Le Pen and then against his daughter, every political grouping in the country has been rallied to save "democracy" from the National Front. This tactic is used because it works; almost 75 years of relentless propoganda about World War II and linking every patriotic movement has scared away normal citizens from opposing the trends destroying their countries.

What is interesting is that the government went back to this playbook last week.

"Marine Le Pen urged people to come to the Champs Elysees, and there are members of the ultra-right putting up barriers," Mr Castaner said.

"They have responded to Marine Le Pen's call and want to take the institutions of state. We want people to be responsible.

"The right to demonstrate is a fundamental right and we will protect that, but we cannot protect those carried away by violence... those who only want to protest should pull back from this violence and denounce it."

Ms Le Pen rejected the accusation that she had egged on protesters and said she had "never called for any violence whatsoever".

She accused the government of "organising the tension" and seeking to make her a scapegoat.

Yet the continuing protests show that this scare campaign did not work. If anything, protests have intensified in the last week. This should not be construed as a massive show of support for Le Pen or nationalism, the protests have a much broader base. But it does show the same old scare campaigns don't work anymore.