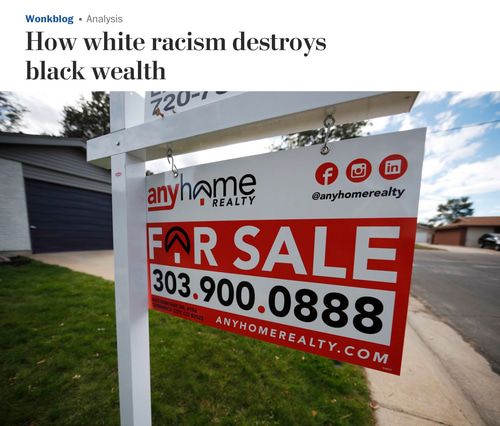 There are a lot of reasons that home prices tend to be lower in black neighborhoods than in white ones. Decades of racist policies put in place by governments and private companies — segregation, redlining, deed restrictions, exclusionary zoning, the deliberate hollowing out of urban cores — have had the net effect of eroding the quality of life in many majority-black neighborhoods nationwide.

But the authors — Andre M. Perry and David Harshbarger of Brookings and Jonathan Rothwell of Gallup — weren’t satisfied with that simple comparison based solely on neighborhood demographics. It’s too easy to explain that difference away with other factors, such as the structural characteristics of the buildings and access to good schools, good jobs and good stores.

They wanted to isolate the effects of racism alone — to peel off all the other explanatory variables until they could “detect how much racism depletes wealth from black homeowners,” as they put it. In the end, they were left with one number: $48,000.

That’s the amount the average home in a majority-black neighborhood is undervalued, relative to an identical home in an identical all-white neighborhood once you properly adjust for all the other structural and neighborhood characteristics that could plausibly affect that number. That’s the “cost of racial bias,” as the authors put it, “amounting to $156 billion in cumulative losses” accruing to black homeowners. …

“If we can detect how much racism depletes wealth from black homeowners, we can begin to address bigotry principally by giving black homeowners and policymakers a target price for redress,” the authors write. “Laws have changed, but the value of assets — buildings, schools, leadership, and land itself — are inextricably linked to the perceptions of black people. And those negative perceptions persist.”

Or, wait a minute, are you saying that blacks get a $48k discount on homes?