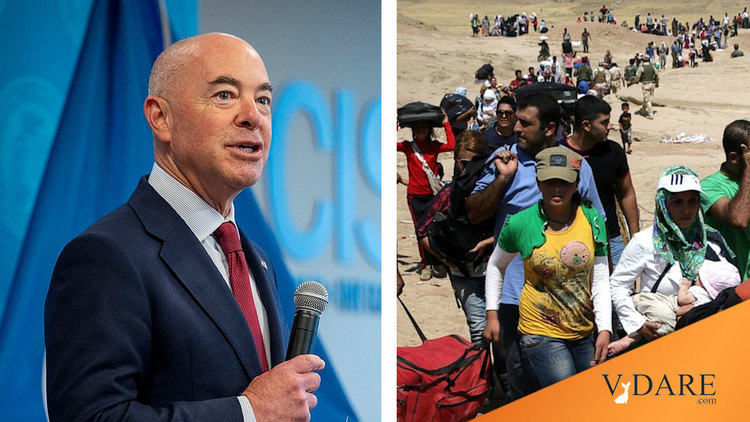 Aside from simply opening the border, refusing to deport illegal aliens, including criminals, and releasing 40 percent of those caught by the Border Patrol, Temporary Protected Status is another weapon the Biden Regime is using to push The Great Replacement. Given to non-immigrants who fled to the United States and supposedly cannot return home because it’s too dangerous, TPS isn’t just for “refugees.” Biden has repeatedly used it to it keep illegals in the country who would be sent back home. In April, 12,000 Cameroonians received it. In June, it was 343,000 Venezuelans. Now, Homeland Security chief Alejandro Mayorkas announced today, DHS will extend TPS for nearly 7,000 Syrians.

@DHSgov made the right move-- an 18-month extension AND re-designation of Syria’s TPS, a program which allows many Syrians to work and live legally in U.S. https://t.co/PqRvkAWL4b

Syrians who supposedly fled the war in their country can stay here until March 31, 2024 instead of going home—where they belong—on October 1 [Secretary Mayorkas Extends Temporary Protected Status for Syrians in the United States, DHS.gov, July 29, 2022]. In addition, “Syrians residing in the United States as of July 28, 2022 to be eligible for TPS.” So an Islamic terrorist could have landed here yesterday, and Mayorkas just gave him two years to plot a bombing.

The reason for this beneficence?

The ongoing civil war has resulted in large-scale destruction of infrastructure, mass displacement of civilians, high levels of food insecurity, limited access to water and medical care, and indiscriminate and deliberate killing of civilians. Over a decade after the uprising that sparked the war, Syria continues to be mired in conflict, political instability, and economic turmoil, all made more acute by the COVID-19 pandemic. These conditions prevent individuals from safely returning.

BS. But it’s about what you’d expect from an unindicted visa fraudster.

The extension applies to about 7,400 Syrians. They will include “nationals of Syria (and individuals without nationality who last resided in Syria) in the United States in nonimmigrant status or without immigration status.”

Worst thing is, this has been going on for 10 years:

But at least only 7,400 are eligible, unlike the 12,000 Cameroonians and 343,000 Venezuelans, or the Liberians Biden protected from deportation by granting them “Deferred Enforced Departure,” which is TPS under another name.

Another recent Biden move: permitting illegals with TPS to leave the country, go back home, then return to the United States as legal immigrants.

Leftist Rep. Alexandria Ocasio-Cortez wants all refugees to get TPS, the direction in which Biden and Mayorkas are heading.