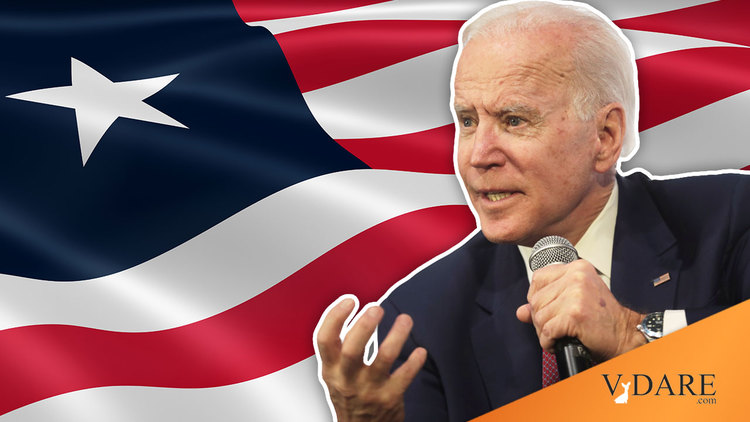 Aside from releasing 1 million mostly Hispanic illegal aliens to colonize the American heartland, Traitor Joe Biden has declared that Liberian illegals can stay and work here until June 30, 2024. Biden says the reprieve from being deported is in the “foreign policy interests of the United States,” although he doesn’t explain how [Memorandum on Extending and Expanding Eligibility for Deferred Enforced Departure for Liberians, WhiteHouse.gov, June 27, 2022]. In fact, the decision serves the interests of the Great Replacement.

Similar to Temporary Protected Status (TPS), DED provides aliens on expiring visas and illegal aliens temporary protection from removal if their home country is experiencing an armed conflict, a natural disaster, or extraordinary circumstances that prevent their safe return.

Not that Biden did anything five of his predecessors didn’t.

Bush 41 gave TPS to more than 10,000 Liberians in 1991, Slick Willie Clinton gave DED to Liberians when TPS expired, and Bush 43 and Barack Hussein Obama did likewise.

Even POTUS 45 Trump got in on the act:

In March of 2018, President Trump terminated DED for Liberians but allowed for a one-year wind-down, which he then extended for another year. During that time, LRIF was added to the National Defense Authorization Act (NDAA) of 2020, giving this population amnesty when the NDAA was signed into law.

Biden protected the Liberians on Day 1 of his administration when he opened the borders and stopped enforcing U.S. immigration laws [Reinstating Deferred Enforced Departure for Liberians, January 20, 2021].

The latest memorandum says “DED and continued employment authorization shall apply to any Liberian DED beneficiary as of June 30, 2022, or any Liberian national who has been continuously present in the United States since May 20, 2017,” except for those in six categories [emphasis added].

Of course, in two years, Biden will extend what Peña rightly called a “soft amnesty.”

But remember, the Great Replacement is just a crazy conspiracy theory.