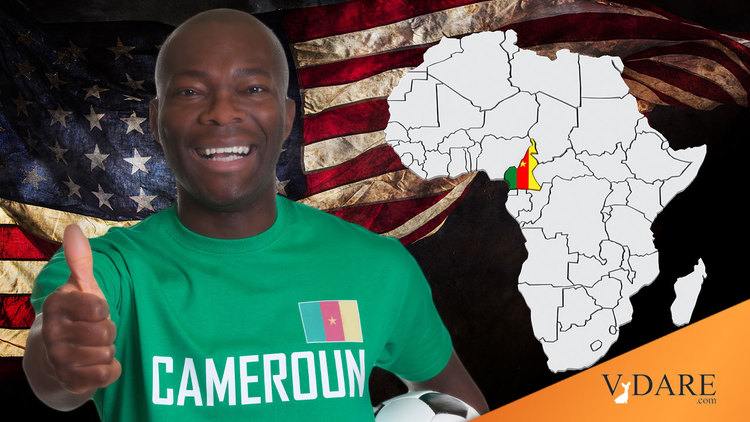 Ensuring that Africans aren’t left out of the fun of browning the United States, President Biden will give Temporary Protected Status to tens of thousands of Cameroonians, the Department of Homeland Security has announced. And, of course, they’ll get work permits.

Americans must be subjected to this because Cameroon is at war. Internally. Of course.

DHS announced the designation of Cameroon for TPS for 18 months. This marks the first time the Secretary of DHS will permit qualifying nationals of Cameroon to remain temporarily in the United States pursuant to a TPS designation of that country.

“Cameroonian nationals currently residing in the U.S. who cannot safely return due to the extreme violence perpetrated by government forces and armed separatists, and a rise in attacks led by Boko Haram, will be able to remain and work in the United States until conditions in their home country improve,” said DHS Chief Alejandro Mayorkas, the unindicted Cuban-Jewish visa fixer.

As long as the Africans were in the country by April 14, they can get TPS and a permit to steal a job from an American.

Reuters put the number of Cameroonians in the United States at 12,000 [U.S. grants temporary deportation relief to immigrants from Cameroon, by Kristina Cooke and Mica Rosenberg, April 17, 2002].

Any bets that none of the 12,000 will never go home, or that those who jump the border with Mexico will get TPS eventually, too? Or that Mayorkas will simply ignore them the way he has ignored the invasion across our southwest border?

Cameroonians have been piling up at the border for at least three years.