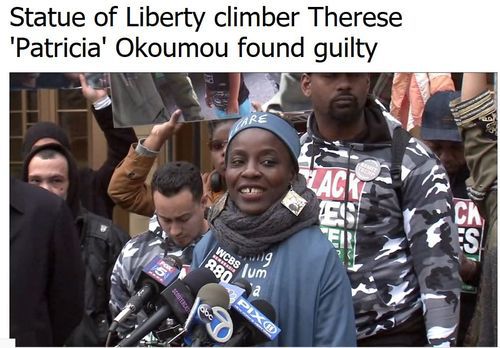 For some reason, what used to be our country is being punished by the presence of one Therese "Patricia" Okoumou. She is an immigrant from the Democratic Republic of the Congo (or whatever it's calling itself these days) and has clearly assimilated to the mainstream American culture of complaining about racism for a living. In 2005, she filed a lawsuit complaining of discrimination in New York, which was reportedly tossed out. She also has had various other brushes with the law [Statue of Liberty climber identified as immigrant activist, by Larry Celona, Tina Moore, and Chris Perez, New York Post, July 4, 2018].

A woman who climbed the base of the Statue of Liberty in July to protest President Donald Trump's immigration policies was found guilty Monday of three misdemeanor counts of trespassing, interference with government agency functions and disorderly conduct.

Therese "Patricia" Okoumou had pleaded not guilty in her Fourth of July stunt, in which she climbed onto Lady Liberty's right foot and refused to come down.

Okoumou testified on her own behalf and got choked up, saying images of parents being separated from children at the border gave her nightmares.

As Oscar Wilde said, it would take a heart of stone not to laugh.

She is facing eighteen months in federal prison, though with the way judges are, who knows what will happen. How much jail time she is given, or indeed if she is given any time, is no sure thing given the courts today. Sentencing is March 5.

One thing that was not highlighted by some media outlets, but was mentioned by The New York Post, is that this invader was wearing a shirt which said, "No human is illegal on stolen land" [Protester who climbed Statue of Liberty found guilty on all counts, by Kaja Whitehouse, New York Post, December 17, 2018]

Notice this is an attempt to frame the United States of America as illegitimate. After all, everything is "stolen land," therefore we can't exclude anyone. Thus, it's advocating the abolition of the United States as well as open borders.

Why is this hostile invader entitled to be here lecturing us? Why can't she return to that bastion of civilization and beauty known as, uh, the Congo?

Forget prison. Just send her back.