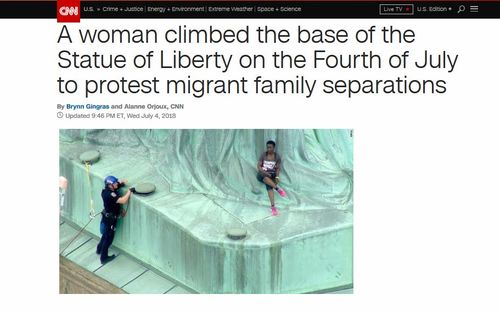 The Statue of Libery was a gift from our nation's first ally, France, to celebrate our independence. This may be surprising to many Americans because thanks to years of coverage by anti-citizen journalists, The Statue of Liberty is now widely perceived as a monument to immigration.

So it's not surprising Lady Liberty became a target of pro-foreigner protests on Independence Day.

A woman who climbed up to the robes of the Statue of Liberty to protest the separation of migrant families was taken into custody after a standoff with police on the Fourth of July.

Authorities had tried to talk the woman down but she refused to leave. For nearly three hours, she crossed the base of the statue, at times sitting in the folds of the statue's dress and under Lady Liberty's sandal. The woman was identified as Therese Patricia Okoumou by a law enforcement source close to the investigation and another source who knows her.
The woman was part of a group of protesters and had declared that she wouldn't come down until "all the children are released," a source with the New York Police Department told CNN.
[A woman climbed the base of the Statue of Liberty on the Fourth of July to protest migrant family separations, by Brynn Gingras and Alanne Orjoux, CNN, July 4, 2018]

Authorities, presumably fearful of terrorism, shut down the island during the incident, so no one could visit the statue. The possibility of terrorism is another one of those things we have all just gotten used to thanks to diversity.

The whole episode serves as a great metaphor. A monument to celebrate our national independence can't be enjoyed by citizens because a resentful black woman doesn't think there are enough foreigners dispossessing Americans on Independence Day.