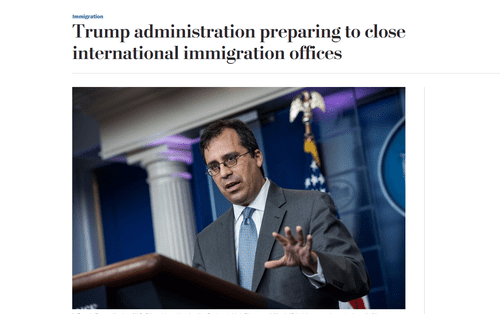 Your humble correspondent has been advising and warning, first candidate Trump, then President Trump, on the issues he would be and is now facing in the immigration bureaucracy. See President Trump Will Have Foes In Immigration Bureaucracy—But Also Friends. They Can Help Him Win, April 26, 2016. Most of my sage advice and warnings have been ignored. Sadly, many errors and sabotage could have been avoided or thwarted with my insider’s knowledge. Given the information bubble around the President, one is not surprised. Though it appears that someone, Stephen Miller perhaps, is reading my advice as some information is penetrating the bubble. This, of course, could have all been avoided by hiring the best and brightest, rather than RINO retreads like Lady DACA and Javanka. One good hire was L. Francis Cissna, now Director of U.S. Citizenship and Immigration Services (USCIS). USCIS is one of the battlegrounds in the immigration bureaucracy. It is filled with Never Trumpers, advocates for illegal aliens, and outright traitors like Irene Martin, among other saboteurs.

Despite ongoing failure in the personnel arena, it appears that someone is still on the Trump Train for immigration enforcement, and it is in USCIS, the least likely component to take that tack, but Cissna is a true believer. He appears to be following, to some degree advice from your correspondent. [Taming U.S. Citizenship And Immigration Services, by Federale, Federale Blog (Since Deleted by Google but preserved by the Wayback Machine), December 17, 2016]

First, Cissna’s strike at the bloated and coddled USCIS bureaucracy by using bureaucrat game against the bureaucrats.

The Trump administration is preparing to shutter all international offices of U.S. Citizenship and Immigration Services, a move that could slow the processing of family visa applications, foreign adoptions and citizenship petitions from members of the military stationed abroad.

USCIS Director L. Francis Cissna said in an email to staff Tuesday that he is working to transfer those duties — now performed by employees worldwide — to domestic offices and the State Department’s embassies and consulates. He wrote that if the State Department agrees, the agency would move to close its international field offices in coming months “in an effort to maximize our agency’s finite resources.”

“I believe by doing so, we will better leverage our funds to address backlogs in the United States while also leveraging existing Department of State resources at post,” he wrote. “Change can be difficult and can cause consternation. I want to assure you we will work to make this as smooth a transition as possible for each of our USCIS staff while also ensuring that those utilizing our services may continue to do so and our agency operations continue undisrupted.”

A little background about the USCIS International Offices and assignments. Most are gravy train assignments, especially for the so-called Refugee Offices, which are located in Frankfurt, Rome, Bangkok, and New Delhi. And the offices do not serve Americans, but mostly refugees, asylees, and other aliens generally submitting fraudulent applications for some sort of status. For those aliens applying for regular status, e.g. an immigrant or non-immigrant visa, the Department of State (DOS) is in charge of making final eligibility determinations. The USCIS officers generally only assist with the most fraudulent immigration methods, refugee and asylee applications. While there are some good officers overseas for USCIS, for example the Fraud Detection and National Security personnel who investigate fraud along ide Homeland Security Investigations (HSI) Special Agents and Diplomatic Security Service (DSS) Special Agents, most employees are there to provide a benefit for aliens and most of those who receive asylum and refugee benefits are committing fraud.

Now, I don’t know if Cissna or some of his aides are reading my work, butthere is a correlation. Recently I advised this solution, specifically dealing with the rejected refugee/aslyees being refused entry by Australia. And it is all within President Trump’s full and unreviewable authority, his pen and phone, his executive action, his being the Chief Executive as envisioned by Article II of the Constitution.

All President Trump needs to do is withdraw all the USCIS employees stationed overseas, in luxurious conditions at most posts, other than those assigned to investigate immigration benefit fraud. Those employees are from the Fraud and National Security Directorate.

[Trump’s Options In The Refugee War With The Kritarchs—The Executive Branch Can Refuse To Process The Refugees, by Federale, VDARE.com, February 16, 2017]

This is all about executive action and the President using his power to fulfill his promises and make his administration successful. President Trump, Sí, Te Puede! Take action, like ending refugee and asylum processing overseas. You can also deploy the military to the border to end the current crisis. Only you can return to winning.