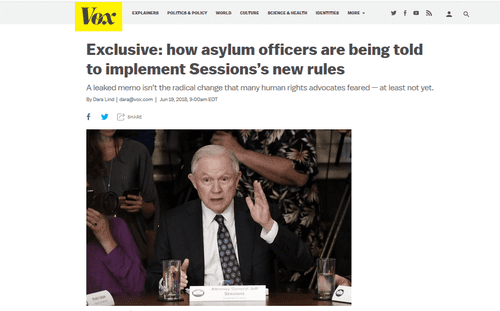 Bureaucrats buried deep inside U.S. Citizenship and Immigration Services (USCIS) moved immediately to thwart recent reforms regarding fraudulent asylum claims that are clogging the immigration courts, now over 312,000 and rising.  USCIS immediately announced that it would slow-walk the instructions on immigration law issued by the Attorney General.  This should come as no surprise.  The saboteurs in USCIS lead #TheResistance to President Donald J. Trump’s immigration policy of enforcement first and stopping fraud in the immigration benefit programs administered by USCIS.  I warned President Trump over two year ago with an analysis of the friends and foes he will have in the immigration bureaucracy.  Allow me to quote myself, here at VDARE.com, April 2016:

But the real problem will be with USCIS. The management is overwhelmingly in support of illegal immigration and the illegal aliens who are in effect their “customers.” USCIS has decided it is not a law enforcement agency, but a service agency. The management at all levels is politically corrupt and will approve any benefit for aliens—even if it is illegal to provide that benefit to an alien. It needs to be cleaned out from top to bottom.

[President Trump Will Have Foes In Immigration Bureaucracy—But Also Friends. They Can Help Him Win, April 25, 2016]

Not to be content with sabotage, USCIS bureaucrats actively protected Muslim terrorists against enforcement action after the San Bernardino attacks and Resistance bureaucrats ran their own secret asylum program for Muslims.  There is war going on in USCIS, the Trump appointee at the head is in a deadly battle for control of the bureaucracy with the Resistance traitors in the middle and upper management.

Now the Resistance is striking back.  It is attempting to sabotage the roll-out of the new instructions on combating asylum fraud.

A leaked memo isn’t the radical change that many human rights advocates feared — at least not yet.

But an internal memo sent to the people actually responsible for implementing Sessions’s ruling at the border, and obtained exclusively by Vox, indicates that Sessions’s revolution isn’t as radical as it seemed — at least not yet.

That could be very good news for parents separated from their children, who will have to face an asylum screening to be allowed to stay in the US in immigration detention after they are criminally charged and convicted under the Trump administration’s “zero tolerance” policy.

The leader of #TheResisance deep in the bowels of USCIS’ Refugee, Asylum and International Operations is the well paid John L. Lafferty, a long term bureaucrat in USCIS in the asylum arena, undoubtedly chaffing under the new rules and new ruler.

The memo obtained by Vox was written by John L. Lafferty, the head of the Asylum Division for US Citizenship and Immigration Services, on Wednesday, June 13, two days after Sessions’s ruling in Matter of A- B- was released. It’s labeled “Interim Guidance” for asylum officers — the people in charge of conducting interviews for asylum and “credible fear” screening interviews for migrants at the border that determine whether they’ll be allowed to stay in the US and pursue an asylum claim.

As the “Interim” label suggests, Lafferty’s memo makes it clear that USCIS will be issuing more directives to asylum officers as it continues to analyze Sessions’s ruling. But in the meantime, it doesn’t dictate sweeping changes to asylum standards.

The Lafferty Memorandum clearly seeks to limit the scope, intent, and implementation of the legal reforms imposed by Attorney General Sessions, and quite flagrantly.  It is almost as if Lafferty doesn’t consider himself bound by his superiors.

Sessions’s ruling declared, “Generally, claims by aliens pertaining to domestic violence or gang violence perpetrated by non-governmental actors will not qualify for asylum.” That language isn’t replicated in the memo — which urges officers to deal with claims on a case-by-case basis.

The only specific change the memo mandates to asylum policy is for officers to stop citing a past Board of Immigration Appeals precedent, Matter of A-R-C-G-, which found that “married women in Guatemala who are unable to leave their relationship” constituted a particular social group — allowing some domestic violence victims to claim asylum based on their persecution as members of that group.

But while A-R-C-G- was the only precedent Sessions explicitly overturned, his ruling also said that “any other” precedent from the Board of Immigration Appeals was also moot if it had defined “particular social group” more broadly than Sessions did last week.

The initial implementation memo from USCIS doesn’t mention any such rulings. It emphasizes that officers should make decisions based on two precedents Sessions held up as good decisions — both of which denied asylum claims based on gang violence — but doesn’t identify any decisions that are too broad under Sessions’s standards.

This not the first battle within USCIS where saboteurs are working day and night to limit the impact of President Trump’s election.  Lafferty obviously considers himself like Peter Strzok, the FBI agent who texted that President Trump’s election will be overturned.  Lafferty is the USCIS version, a self-appointed avenger for Hillary Clinton and  working single handed to overturn the election in the area of asylum policy and practice.

Time for the head of USCIS, L. Francis Cissna, to move against the insubordinate bureaucrat Lafferty and show him the door, just as Strzok was just escorted from the J. Edgar Hoover Building in disgrace.