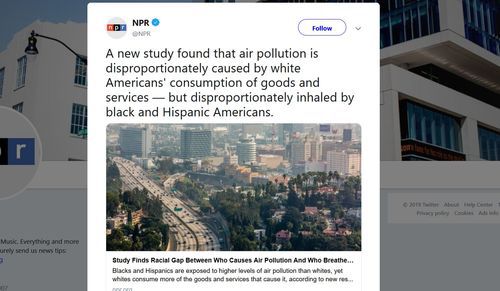 White People Affecting The Air That You Breathe

Remember when The Respectables were trying to have Tucker Carlson fired for mentioning that Latinos litter a lot?

You can tell by how Hispanics all drive electric cars, hybrids, or whatever has the best pollution control equipment.

Future headline: “White People Found to Be a Waste of Space.”

Seriously, there isn’t all that much air pollution in the U.S. anymore. As a Los Angeles native I want thank everybody in the rest of country for the considerable economic sacrifices you all made to help clean up L.A.’s smog problem. I’ve tried to get economists to estimate how much getting rid of smog in L.A., Albuquerque, and Denver cost the country: I figure easily 12 digits and maybe 13, but nobody else seems interested in the question.

Back when there was a lot of smog in Southern California the pecking order went from West to East as the prevailing winds blew in off the ocean: