Above is a Tweet and reply on the San Francisco Middle School whose principal, Lena Van Haren, sent an email to parents saying she got the results of the student elections and they weren't diverse enough, so unacceptable.

The man replying obviously knows that in any story about a school, you need to look at The Graph—the one GreatSchools provides under the Details tab on any school's webpage—here it is: 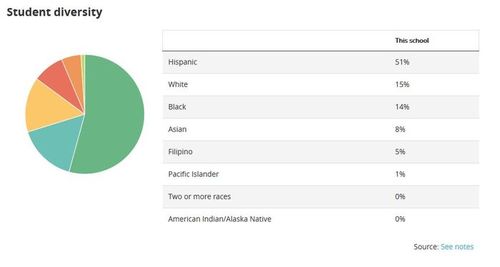 Yes, the students are 85 percent non-white—blue equals white, green equals Hispanic, et cetera. (They assign chart colors by size of group, because they'd be embarrassed to show the colors as white, black, brown and yellow, so you always have to look at the legend.)

A student government election at a San Francisco middle school had its results ignored after a principal decided the candidates elected were too white.

Elections were held at Everett Middle School Oct. 10, but on Oct. 14 principal Lena Van Haren sent an email to parents saying the results were being ignored, without being made public, because those elected did not reflect how diverse the school is. While Everett is more than 80 percent non-white, Van Haren said the election results “weren’t representative” of that.

“That is concerning to me because as principal I want to make sure the voices are all heard, from all backgrounds,” Van Haren told local KTVU News.

But at least one of the middle schoolers who ran is calling Van Haren out for her rhetoric.

“The organizers are saying things like, ‘we want everyone’s voice to be heard,’ but in truth, the voters’ voices are not being heard,” seventh grader Sebastian Kaplan told KRON, another local news station. “The whole school voted for those people, so it is not like people rigged the game, but in a way, now it is kinda being rigged.”

Van Haren went on to say that she is considering a variety of fixes to the problem, including appointing several new positions in order to ensure more minorities are represented without kicking out those who actually won the election.

Now, this actually happens in real elections for real-world candidates, in that minorities choose to be governed by whites. (Remember Vicente Fox? Remember Ferguson?)

There are two possible reasons for this electoral result in this school.

One, that minorities chose to vote for someone who might know what they're doing—Everett has a high English learner population, they might prefer a student government executive that can actually speak English.

Two, that minorities don't actually give a damn about student government—equivalent to the Hispanic vote turnout situation in adult politics.

There's only one reason for the Principal's action—white self-hatred.

Post
Covid Fatalities Tend To Be Past Their Primes: The Best Example Of This Yet
MORE...
POPULAR TAGS